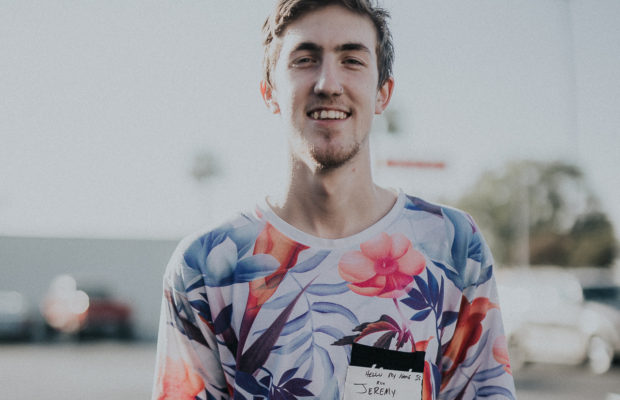 Indianapolis-based photographer Jeremy Keeney has spent time this past year on the road with Blessthefall, Too Close To Touch, I The Mighty, and more. Getting his start in the local scene back in high school and working his way towards becoming a touring photographer, Jeremy gave us the inside scoop on how he built his career, why Instagram is a vital tool for photographers, and why he will never get sick of photographing the guys in Blessthefall.

A few years ago while I was in high school, I was an avid skateboarder, and watched a lot of YouTube. A lot of my friends, and I started up this YouTube channel (since then, it’s been deleted to save embarrassment). Along with the channel, I’d do photos for the guys just to post on social media and such. That’s probably the first time I took photos.

January 2014. It was a Hands Like Houses show. I don’t think I would’ve changed much. I googled some tips on concert photography, and just shot some photos. Interesting story, both Picturesque and Too Close To Touch were on the bill, but Too Close To Touch had a couple van issues and didn’t make it. Always fun to look back at.

Blessthefall. Kind of biased, but the guys always give me the shots I want, or they do something to mess around with me. Always fun on stage, and it’s just one of those bands I never get tired of.

You spent some time this past year on tour with Blessthefall, Too Close To Touch, Light Up The Sky, I The Mighty, and more! What do you like most about touring and what did a typical day on the road look like for you?

I love seeing all these new places that I had never been to before I got on the road. That, and the restaurants I go to in certain cities. A typical day is honestly pretty relaxing compared to most people I know who tour often. I usually don’t do anything until I get to the venue. We arrive, and I’ll help load gear in, then I find a wall outlet and get started. Usually I take this time to upload the previous days’ photos to Dropbox, and move all my imported photos off my laptop and onto an external hard drive to keep free space. If there’s any “behind the scenes” photos from the drive to edit, I’ll do those quickly. Then while everything uploads, I’ll set up the merch area for the night. Then show time. I’ll take photos of the band I’m with, then head back to merch. Usually, I try to edit and upload 4 photos online right away, all while trying to sell merch. Once those are uploaded, and merch is easing up, I’ll finish editing the rest. If possible, I’ll start uploading to Dropbox right away. The rest of the night I’ll either sit at the table, or take some photos of the other bands just to have something to do.

As an experienced tour photographer, what are some do’s and don’ts you feel photographers should know before hopping on a tour?

Nothing huge. Just make sure you’re good with time management, and multi-tasking. I always end up trying to do as much as I can. Make sure you’re comfortable sleeping in a van, showering at a gym, and eating a lot of fast food. There’s no requirements for tour to me, just make sure it’s with the right people.

A photo of Daniel from Capsize back in 2015 on Warped. He came out and did guest vocals for Being As An Ocean. He immediately stepped on top of the crowd, and they all held them up. I was in the middle of the crowd, and just held my camera up and prayed for the best. I actually had him sign a print of the photo that I have on my wall near my computer where I edit.

As an artist who is pretty active on his social media accounts, do you feel as though social media platforms have helped your career in any way? If so, how?

Oh most certainly. Social media is how I’ve met a lot of the people I work with. It seems that I always meet people through social media first, and then after a few back and forth conversations, it leads to us working together. It changes a lot, and it’s a good way to put yourself out there.  They say Instagram isn’t a portfolio, but you’d be surprised how many people come to me with a message starting with, “I see your photos on Instagram…”

Too Close To Touch

As 2017 continues on, are there any bands you are hoping to photograph this year or projects you are working on you can tell us about?

None that I can announce yet. I’m hoping to stay on the road as often as possible. Definitely have some exciting stuff in the talks. For right now, I’m just working with the local scene.

Start small, and make connections. I dove into my local scene, and it’s a great way to start something. I learned a lot through trial and error with local bands. I always try to introduce myself to bands after the show. Just letting them know that I have photos and that I’ll post them, and share them later that night. A small talk goes a long way sometimes.

Photo of Jeremy by Kayla Surico