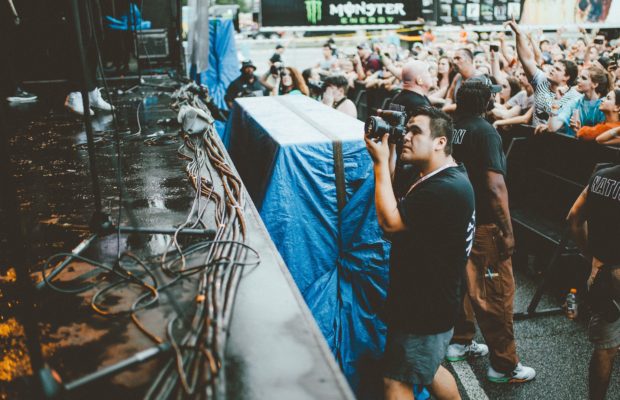 Working closely this past year with The Maine as both their photographer and videographer, you’ve most likely stumbled upon the amazing work by Guadalupe Bustos at some point this year. From vibrant live photographs to striking portraits, Guadalupe has been sharing his unique point of view and passion through his photographs for the past few years. We recently caught up with Guadalupe and he opened up about his career changing summer on Warped Tour, working with The Maine on their Miserable Youth series, and more.

I’d say sophomore year of High School. I took a photography class and after that, I would just shoot and film random stuff I found interesting. I shot 35mm film & polaroids for a while before I got a digital camera. Years later, I sold a bunch of records on eBay and bought my first DSLR.

The first show I shot was a hardcore band I had been into for a while named TAKEN. I believe it was 2013 or 2014. The one thing I would change is to go back and shoot in RAW instead of JPEG…yeah…I know, I’m still upset about that.

Derek of Mayday Parade and John and Jared of The Maine

This has to be one of my favorite photographs I’ve ever taken because I feel like it got me where I am right now. This is one of the first photographs I ever sent to The Maine and one of the first that they posted to their social media accounts. It was taken in Syracuse, New York. While they were walking to their set, I stepped out from the merch tent and quickly snapped it. After that, I kept shooting The Maine when I had the chance and sent them the photos I had taken that day. There’s just something about the positioning/framing of this photo that I really like.

I’d say shooting outside whether it be a festival or photo shoot, natural light is always in your favor.

As an artist who is pretty active on his social media accounts, do you feel social media platforms have helped your career in any way? If so, how?

Very much so, I’d say putting yourself out there and pushing content and constantly showcasing your best work really goes a long way. You can have a portfolio/website and all, but when someone who is looking to work with you can easily see your work on Instagram, Twitter, etc. it’s convenient if you have your best content readily available for them.

Over this past year, you have worked closely with The Maine while they have been touring and working on their new album. How did you first get in contact with the band and end up working for them as their photographer/videographer?

It all started during the summer on Warped Tour, I did merch for Mayday Parade (one of the best bands and crew I’ve ever met). The Maine was a band that musically stood out to me on Warped. I took some photos of them and my friend Mike (@mikewilsonphotos) introduced me to Pat and Ken one night on the bus. I mentioned that I had a few photo sets that I wanted to share with them. They seemed to really like my photos, I also shot some video updates during Warped Tour for them. I continued to shoot The Maine for the rest of the summer.

Most recently, you joined The Maine in the studio as they worked on their forthcoming album, filming and documenting every moment for their Miserable Youth series. What was the overall process like for you in terms of being so involved in the personal documenting during the band’s time in the studio?

I am very grateful that they would allow me to be part of something so special to them because not many are let into this process. Documenting the Miserable Youth series was an amazing experience. Not only because of the beautiful places we were at, but because music is such a beautiful thing, it was surreal to see how these five guys put so much into making a record. Filming it was pretty crazy because I kind of had to be a fly on the wall and that’s what made the footage so real.

How would you describe your overall style when it comes to both shooting and filming?

My overall style has always been framing and positioning, I feel like that really makes a photo for me. As for video, I’m a huge fan of film, whether it be in movies or documentaries, I’m always looking at framing so that contributes to my style.

As 2017 continues on, are there any bands you are hoping to photograph this year or projects you are working on that you can share with us?

One of the bands that I have always really wanted to shoot is Death Cab for Cutie. I’m a huge Death Cab fan and that’s one of the bands on my list so I hope that happens this year. The next thing that I am working on is 8123 fest in Arizona with The Maine.

The best advice I could give aspiring photographers is to practice, go out and shoot and film whatever is interesting to you. Don’t be afraid to try different styles, get inspired by what you like. Keep learning, I still learn on a daily basis.

Portrait of Guadalupe by Elliot Ingham