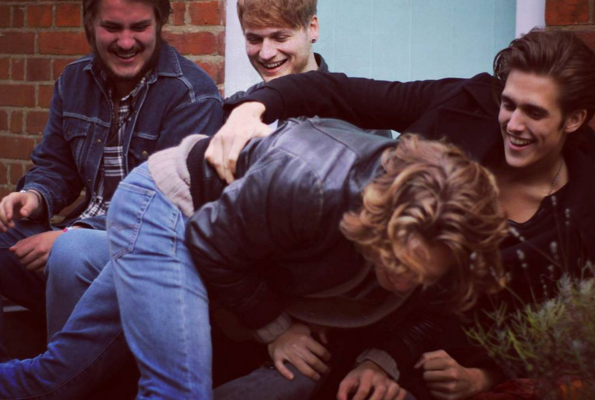 Hailing from South West London, The Shantics are a fresh, new band on the scene that everyone should get familiar with. With a brand new single out this week and a slot to open for Baby Strange in London later this month, we recently sat down with vocalist and guitarist Jimmy Morris to talk about the history of the band and what their plans for the rest of the year are.

How and when did The Shantics form?

Well, my brother (guitarist Harry Morris) and me have been writing songs together for a couple of years now, and have done gigs together with a few different line-ups, but The Shantics were born in September 2015.

‘Mild-Mannered Punk’, which we understand is kinda oxymoronic haha

Has your local music scene influenced The Shantics in any way?

Not really in the way we write our songs, but I think it has given us an enthusiasm because we can see live bands every night of the week in London, and it makes us want to get out there doing it ourselves.

As a band, what is the biggest challenge you have faced?

Guitar cables always tangle themselves up, it’s a nightmare. On a serious note, the biggest challenge was probably finding each other – likeminded and committed members.

Yeah, definitely. We all listen to a lot of different music to each other to be honest, Rob (drummer) and Nubby (bassist) like much heavier music than me and Harry. We tend to listen to all the bands from decades ago. Songwriting-wise, Lou Reed, The Cure, Arctic Monkeys and The Clash have influenced us, among loads others.

We are shortly going to finish a load of songs that we have been recording, and look towards getting management. We don’t have a set path to be honest, just gonna keep working hard and writing songs – whilst keeping our eyes peeled for the opportunities.

Stream their brand new single “Maybe I…” below and read Stitched Sound’s exclusive review of the track here.