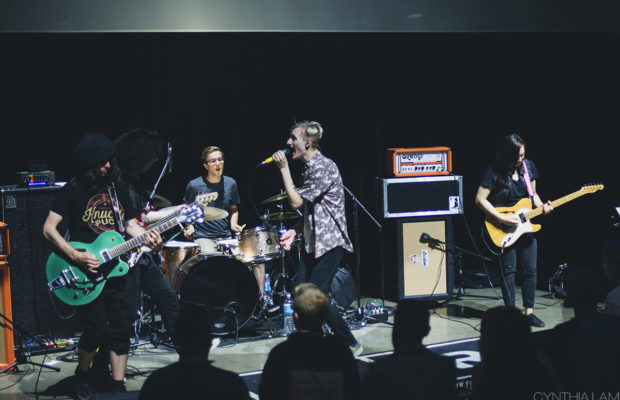 What first brought you all together to form On The Frontline? When you first started, what goals did you have in mind, and where are you at in regards to achieving them now?
The band was formed by Catherine who was looking for like minded musicians to form a pop punk band. We’ve had many people come and go through the years but Mike and Jared have always stuck around and have been the core members of the band since it started. The goal from the beginning was to pursue our passion for music and spread it to other people with hopes that it will leave a positive impact. We would love to make this a career and reach as many people as possible. So far, we’ve become a part of the local music scene in Edmonton and have played with many of the other local bands and connected with show goers. We’re going on tour very soon for the release of our debut EP Walls and to play our music for new audiences and connect with people away from home.

You’ll be releasing your new EP Walls this month! What can listeners expect from your upcoming release? Any particular songs that you’re especially proud of on the album?
Walls embodies our development as a band over the last four years that we’ve been together. Some songs are old and a couple were written just before the recording of the album. Over the years, we’ve gone through a lot of changes and faced many challenges, and we think listeners will be able to hear the development in the songs. Lyrically, there are similar underlying themes between each song representing the challenges that life brings and personal growth, something that listeners will be able relate to. Sonically, the album sounds like a mix between the raw early 2000s pop punk era and the polished sound of today’s pop rock music. Our music is influenced by bands like Paramore, State Champs, The Story So Far, and Simple Plan.

“City Lights” and “Walls” are the most recently written songs, and for us they really stand out to demonstrate our growth as a band. “Starting Over” has more meaning behind it as the oldest written song on the record, but was re-written just before going in to the studio. The lyrics are now more representative of who we are and the instrumentals are more refined.

As a local Edmonton band, how would you say the local music scene has influenced you, personally or the band as well? Would you say that it has played an instrumental role in the success of the band thus far?
We’ve been introduced to so many inspirational and supportive people in our local music scene. From local venue owners to bands, we’re received lots of positive feedback on our music and encouragement to keep going. Carol-Lynn Quinn from High Love has been a mentor and friend to Jared and Mike for the past couple years and is very supportive of our music and the direction of our band. Randor Lin, our producer on the record, has been in the scene for a long time and has recorded many bands like ourselves. I was a great experience working in the studio with him because he has so much positive energy and was always stoked on our music. He definitely has taken our music to a higher level. Without the love and support from these people, we wouldn’t be able to get as far as we are now.

What are some of your favourite hometown venues and why?
We recently just played The Rec Room and it is now one our favourites. They have a nice stage, great sound, and are very welcoming. The Mercury Room has also been a favourite. It is the first venue we ever played and was during the time when they were also just starting up. Trevor has done a great job with the place. They have an amazing sound system and great atmosphere, we’re always stoked to play there. Rendezvous Pub is another one. There are very inviting and we can always count on Calvin to put on a good show for us.

You’ve also just recently played your single release show for “Runaway” – what was that experience like?
It was a lot of fun! It was a great experience playing The Rec Room for the first time. We got to share the stage with a couple sick bands we haven’t played with before, as well as Point Place who are always a fun time to play with. The show had a good turnout and people were into the music. It was a great night all around!

You’re also set to embark on a western Canada tour this July! What can fans expect from you guys at the show, and are you looking forward to any stops/cities in particular?
This is our first tour and we are bringing everything we got. They can expect high energy sets, bumpin’ covers, a friendly group of musicians to hang with, mosh pits, the clothes are coming off. Maybe not that last thing, but we are also touring with White Chocolate Thunder, a pop-punk band from Calgary. Those guys are crazy and their music is catchy as hell.

We are looking forward to being in places like Kelowna and Vancouver. It will be cool playing to the crowds there and just being in those beautiful cities. We are very excited to be playing Electric Love Festival near the end of tour. It will also be our first experience playing a festival and we can’t wait!

What can we expect from the band for the rest of 2017?
After we get back from tour, the next thing we have planned is to shoot a music video for “Walls”. After that I suppose we will be for writing for our next full length album, while still playing shows in our hometown and possibly travelling our to nearby cities. We’ll be continuing to put out more content online to keep our fans in the loop and planning for our next tour.

For the music lovers out there, check us out if we’re playing in your city! We would love to meet you and share our music with you! If you would like to check us out, you can find us on YouTube, Spotify, iTunes, Instagram, and Facebook. Hope to see you soon!