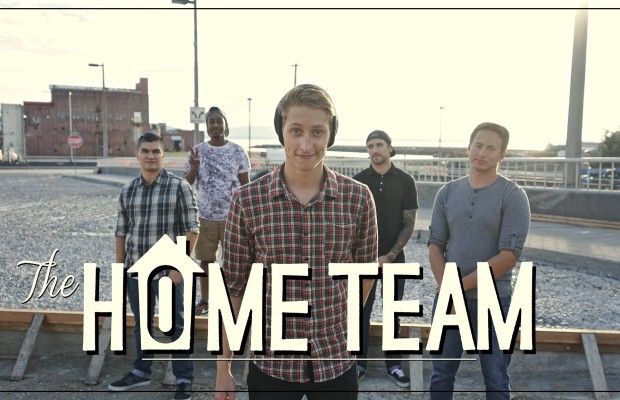 Hailing from Washington state, The Home Team’s a five-piece pop punk band that is on the verge of taking the scene by a storm. Featured in the local bands spread of our latest digital issue, we caught up with vocalist Brian Butcher about the history of the band, their local music scene and what they have planned for 2016.

How and when did The Home Team form?

The Home Team actually formed in 2012 after our drummer, Daniel, had the idea to form a band in this genre of music a few years before. Everyone in the band actually stems from the Seattle metal scene! Daniel was the drummer of a band called Idols, and despite the fact that the band was touring and moving forward, he had it in his sights that the market for deathcore is only so expansive, and it’s every musician’s dream to be able to support themselves financially by touring and doing what they love.

In an effort to reach an entirely new and more promising market of people, Dan and our guitarist John (also an avid metal musician) began to send some pre-pros back and forth of music that, as they describe it, “they could show to their moms.” After getting some material ready, they plucked some other metal heads from the scene and formed the rest of the band. As always with newly formed bands, members quit, got kicked out, etc. But after five separate tours, three of which I was able to attend, we have a lineup that we couldn’t be more excited about. We all have the same vision and work so well together, drawing on each other’s strengths and making up for our respective weaknesses. And of course, we’re all still blasting metal when we’re out on the road!

Well, originally when the band was formed, the initial vision for the music was modeled distinctively after music like Fall Out Boy or All Time Low. And don’t get me wrong, I still think we sound a lot like those bands! But I think what naturally occurs when people come together and make music is a sort of internal phenomenon of taste and preference, in that it’s almost inevitable for certain facets of what appeals to a musician to come out in their work. And I think the way our love for heavier, more intense music shows itself is in the fact that our music has kind of sprouted aspects of pop punk and a faster style of playing.

Of course we still have our pop rock ballads, our song “Burning Gold” is a perfect example of that. But our most recent release, “Letters from a Friend”, is much more partial to that faster snare-kick-snare-kick pattern found in a lot of pop punk music. I guess you could think about our music as exactly what it is: pop rock written by some metal dudes! Hahahaha.

I’d say in terms of some bands that are doing very similar things, if you’ve ever heard of the band State Champs, they’re a great example of a group doing this kind of thing really well. If I were to sum up our sound a little more concisely, think of old Fall Out Boy (circa From Under the Cork Tree) with a little more modern influences based on what’s been popular as of the last few years.

Has your local music scene influenced The Home Team in any way?

Honestly, I couldn’t have asked for a better place to grow up as a musician than Seattle. The scene is very tightly knit, everyone knows everyone, and it’s almost like this artificially created network of people. Of course, right now the community I’m describing is mostly metal heads, and there’s definitely a separation between the people playing more alternative and indie music.

For instance, the people you would see more often at Bumbershoot or Folklife (two major Seattle music festivals) and the people we grew up playing with. But I think what’s beautiful about cities that celebrate music is that no matter who you are, musicians strike up conversations with other ones so easily. So, for sure the scene has been an influence, despite the fact that our genre differs from what our friends do, but people seem to be down with it! We’ve found that we can play shows with hardcore bands, or those indie ones, and no matter what there will be people at the show that dig the sound, which has been an incredible asset. In this way, you could say the scene has kind of shaped how we market ourselves to different crowds.

As a band, what is the biggest challenge you have faced?

Definitely the lineup changes. It’s always tricky finding that right set of people, since who you have may be a perfect fit for your sound, but perhaps they just don’t gel well with the other members. And then there are plenty of really cool people that, with all due respect, might suck at what they do. I can’t exactly speak for the bulk of the problems that have occurred in the past due to band members, since in the grand scheme of things I’m actually a fairly new member, but something tells me that if The Home Team had the lineup we do now back when it formed, we would be much further along this natural life and progression of a band.

Somewhere along the way, Daniel (drums) figured out that the best people to snag for a project are those that have had experience being “the guy” that runs their own. There’s almost always someone in a band that takes on the bulk of responsibility, and makes it a little more of their project. Although sometimes it requires a bit of sacrifice on behalf of the new member in giving up part of what they’ve established in this other band, their level of reliability, motivation and taste are closer to ideal than you’ll find in just about anyone.

Our current lineup is now made up of five guys that were all at one point or another “the guy” in a band. Again, I couldn’t be more excited about this lineup, and I really think that the way the members of this band coexist with one another is something that will help us immensely in the long run.

There are definitely plenty of artists, both in alternative and heavier music that have hugely shaped who we are as musicians. But focusing on the more alternative side of it, I know Daniel has always been a huge Daphne Love Derby and Jimmy Eat World fan. I’m sure those were two that he had in mind when he formed this band.

Dan and I in particular have also taken a lot of influence for ourselves as musicians from bands like Circa Survive and The Receiving End of Sirens, and as for me, as well as my band mate Ryan (guitar), we’ve been die hard Coheed and Cambria fans since we were kids. Obviously these are a little more progressive than the type of music we’re going for, but there are definitely aspects of their music that have at least influenced our tastes. As far as more direct resemblances to our sound go, again, State Champs is great, Fall Out Boy is a classic, and even bands like The Story So Far have made their imprints in our influences. There’s also a band called I The Mighty that over the last few years I’ve been striving to match the lyrical mystique and ingenuity of. I very much so recommend checking them out.

Going back to the scene and how it’s made it’s mark in our sound, I, for one, absolutely love watching fellow underground musicians doing this kind of music, particularly more than hardcore, only because I’ve noticed a very wide range of creativity from band to band in terms of how they choose to differentiate themselves from everyone else. Paying attention to these details has definitely shaped how I write over the years, and I truly encourage others to pay attention to their respective local bands because there is honestly a lot to learn from them!

Do you guys plan on releasing new music this year?

Well, yes, but I can’t totally speak for how much. We just released a new music video for our single “Letters from a Friend”, and I couldn’t be more excited about it. I think in the next little while we will film a video for an acoustic song as well. But beyond that, we find ourselves in the same boat as many local bands trying make a name for themselves, in that recording music is expensive!

Not to mention, we want our music to be the best expression of our vision as it can possibly be. Because of this, we work with producer Aaron Smith, who albeit is one of the best in the game by far, but also gives you what you pay for in that it’s not the most inexpensive rate around. A lot of bands believe their music will sound the same if they don’t put a lot into it, and that’s just not the case, which is something I only learned through experiencing both ends of it. I couldn’t speak better of Smith’s work, he is truly a visionary in the mixing game, and fortunately it’s not so expensive that we can’t afford it at all, but it’s certainly a quality product to purchase.

So, as much as we would like to bust out songs as soon as we write them, we want to make sure they’re the best they can be. With that said, we spent this winter writing our asses off and producing enough material to supplement a full length album. So for sure, we have it in store. But it may be a little bit of time before we can get it out to our fans.

For all I know, we may do it within the next few months, or possibly not until next year, but whatever be the case, I can guarantee it will be the best product we can make it, because we wouldn’t release something that we aren’t confident in, and that isn’t a good representation of the kind of band we aspire to be.