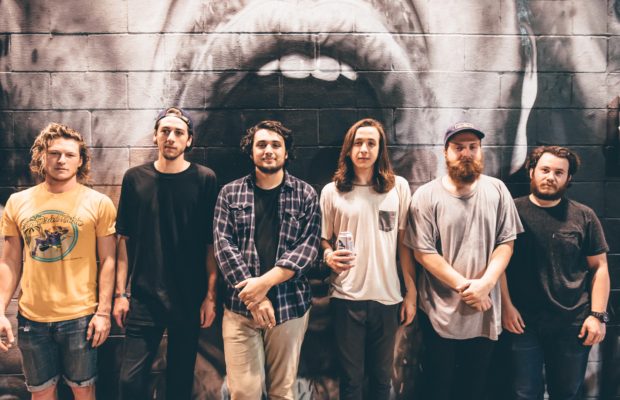 Based in Hammond, Louisiana, alternative-pop band Modern Language is a group that should be on everyone’s radar. Featured in the Local Artists spread of our print issue #7, Modern Language are independently performing and producing music for everyone to enjoy. From where they got their start to their plans for 2016, the band opened up about what it’s like to be an emerging band in the music scene.

How and when did the band form/ when did you get your start?
Matt Harris: Dan [Morreale] and I started writing tunes together in 2013 when our previous project started to dissolve. Zach [Blessing], Micah [Blessing] and Seth [Leonard] were also starting a project together, so we just ended up joining forces. Pat [Mongrue] came in later that year to complete the line-up.

How would you describe your music for those who haven’t heard it?
Dan Morreale: It’s hard to describe, so I’m gonna hit you with some bullet points: guitar driven, layered vocals, loud/soft structure, post-rock outbursts.

Has your local music scene influenced you in any way?
Matt: The scene Dan and I grew up with in Mandeville [Louisiana] was super vibrant. I think part of the reason we love writing and performing so much was being around that throughout junior high and high school.

As a band/artist, what is the biggest challenge you have faced?
Dan: The only real issues we’ve had have come with the decision to make this a full-time thing. Streamlining the life-plans of six dudes is tricky. Finances, logistics, pissing off parents, etc.

Are there any particular artists that have influenced the music you make?
Matt: Dan and I have super similar influences so here is a master list: David Bazan, mewithoutyou, As Cities Burn, Colour Revolt, The Chariot.

What was the recording process like on your latest release?
Dan: It was super laid back. We tracked in Seth’s living room with our good friend, Zach Graeser. We didn’t really have time constraints, so we were free to experiment tonally and be detail conscious. Zach has a great ear and we used that to our advantage.

How was your first tour? Are you planning on touring again soon?
Matt: We didn’t lose money, morale or friendship! As far as first tours go, I’d say it was a success. New friends, new listeners, camping.

What are your plans for 2016 i.e. touring, new music, etc.?
Dan: The plan is to hit the full east coast, record and release another EP when we get home, and then hit the west coast after that. And then breathe sometime around the holidays.

Interview and photos by Jordan Hefler