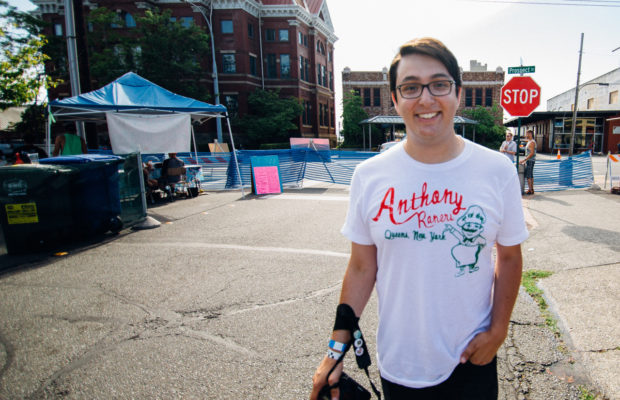 From house shows to arena gigs, Washington-based photographer Tommy Calderon has a versatile portfolio that includes photos of Brand New, Pierce The Veil, and Milk Teeth. During this time on the road with Signals Midwest earlier this month, Tommy took some time out of his hectic tour schedule to share his story of where his career began and how social media platforms have helped his career and the careers of many others in the industry.

I think my interest in photography began when I was a pre-teen with National Geographic and Sports Illustrated. I always tossed around the idea of how cool it would be to do photojournalism, but at that time, I was just getting into punk and music was my main priority. In 2010, I was a junior in high school and I took my first visual communications class. From that point, I realized that photography was exactly what I wanted. At age 17, to now and hopefully for the rest of my life, it will stay as my passion.

The first show I can recall photographing was a house show in Bellingham, Washington. It was a roster of local bands, the three I can remember were So Adult, The Palisades, and Bright Weapons. I was 18 at the time and had no idea that I wanted to put my passion of music and photography together. Looking back, it’s kind of funny that it took me a couple of months to put two and two together. I just loved going to shows and I happened to have my camera on me that evening. If I could have done anything differently, I would have backed up my photos properly because I don’t have any photos from that show. Nonetheless, I still have vivid memories of the show and I haven’t thought about how it was the first show I really photographed.

I’ve never really thought about it, but if I were to describe it in a word I’d say “practical.” I try to assess each situation and work with the smallest amount of gear I can manage. For the first couple years of shooting, I only had one lens and I had to make it work. It was a good lesson in retrospect I think. I love using wide angle lenses to capture the full band and they allow me to stylistically intensify moments. They’re also incredibly practical. I started in small houses, basements and DIY venues that generally didn’t have a lot of room. Wide angle lenses enabled me to open up the spaces and put viewers in a moment.

I met the lead vocalist and guitarist, Max Stern, in 2013 at a house show in Bellingham that my friend Toby Reif and Luke Hogfoss were hosting. Max was in town finishing the vocals for their third album, Light on the Lake, and my friend Toby said, “Hey, you should meet this guy.” I kept in touch with Max, met up with him, his brother, and the rest of Signals Midwest at The FEST 13 in 2014. I always appreciated the way Max and the rest of the band respected me and the work I did so it was easy for me to do anything and everything for them. We eventually became better friends and when they announced that they were supporting The Smith Street Band for a part of their tour this past winter, I messaged Max. It wasn’t much different for this tour, there were some stressful things occurring with the band, but we all managed to make it happen. They’re incredibly supportive and I love them.

What does a typical day on the road look like for you?

Generally, I wake up, pack up and we hit the road after maybe having breakfast. From there, we have the drive where we chat, listen to music, podcasts and audiobooks. We listened to NOFX and The Hepatitis Bathtub and it was a bonding experience to say the least. Once we arrive to the town/venue, we either find something to do to kill time or I will help the band load into the venue. Food from that point is usually found either before or after the show, sometimes both. My job is also to set up and manage merchandise, which honestly, I’m happy to do. Everyone in the band has made friends on the road from the past years and when I do merch, it allows them to talk and catch up. Throughout all of this, I have my camera, take pictures and film a little bit to keep up with the band’s story of their tour. There is a misconception that touring as a photographer is all about the show, but the live performance only is about 50 percent of the tour. I, of course, shoot the whole set and after they finish I stay at the merch table until the end of the night. Once we load the van back up and get to where we’re staying for the evening, I edit the photos from the day and upload them to a Google Drive folder that the band has access to for all of their social media purposes. When all that is said and done, I try to shower and then head to sleep. A typical day is 9 A.M. to 3 or 4 A.M..

What is the best advice you could give to photographers who are looking to begin touring in the near future?

The best advice I can give to anyone that wants to tour as a photographer is to be a genuine person with honest intentions, to be a hard worker and treat everyone with respect. It’s about making connections, yes, but also about building trust and being a friend, those last two things come first before anything. It’s easy to get caught up with the business and dream side of things, but easy to forget about just treating people as people. You could be the best damn photographer on earth, but if you’re an asshole or selfish you won’t get very far.

There is a photograph of Steve Gibson (the drummer of Signals Midwest) on my website that I am most proud of. Signals Midwest were performing in their hometown of Cleveland, Ohio at Mahall’s and Steve was about to hit both of his crashes and as I took the photo I caught him smiling and looking at the camera. As posed as this photo may look, Steve told me he smiles like this only when he plays and he had no idea I was next to him as he looked my way. It makes me proud that I could capture my friend during a time when he is happiest.

Competition is and will always be a part of this industry, but it isn’t something I focus on too much. While competitiveness is healthy especially when it means getting the job or not, it is too easy to get consumed by trying to do better than those around me. I have been consumed by it before, but all it brought me was more negativity than growth and for the first two years of photographing, I found myself stressed and unnecessarily negative. It’s easier for me to encourage and celebrate the accomplishments of those around me. It feels good to be happy for those around me. Nowadays, the only person I try to out do and out compete is myself.

What importance do you feel social media websites such as Twitter, Facebook and Instagram hold in your career and the career of photographers around the world?

Social media is like breakfast, you can live without it, but you’ll have a hell of a better day with it. These platforms are enabling myself and many others to promote ourselves, network and communicate with those around us with ease. It’s a means of promotion that up until recently hadn’t existed before. That being said, however, it’s changing. As time has gone on, social media platforms like Facebook and Instagram have changed their algorithms and as a result have changed the way people can market themselves. Posts now can’t be seen by everyone that follows and likes them unless they pay to get that reach to everyone, which limits and challenges people with less followers. With all this change, it goes to show that as necessary as social media is we have to change the ways we use it and come up with new ideas for promotion as well to continue to grow.

Be open minded. There is a lot of opportunity out there for photographers. There are good ones and bad ones, but until you’ve experienced a lot of both, it’s hard to understand what may or may not be a potential good one. By being open minded, it’s easier to say yes, network, make friends that will hire you again, develop professional ethics, build a reputation and learn how the business works. It’s also helpful to have those friends you’ve made (especially photographer friends) to ask for advice because sometimes making a decision or knowing what to do is hard. If you ask any photographer for advice, they’ll probably give you an answer to it with great detail.

P.S. Maybe keep a spare camera battery and SD card in your car. The last thing you want is to show up for a shoot and have forgotten an SD card or have a nearly dead battery.

Photo of Tommy by Emma Hartwell