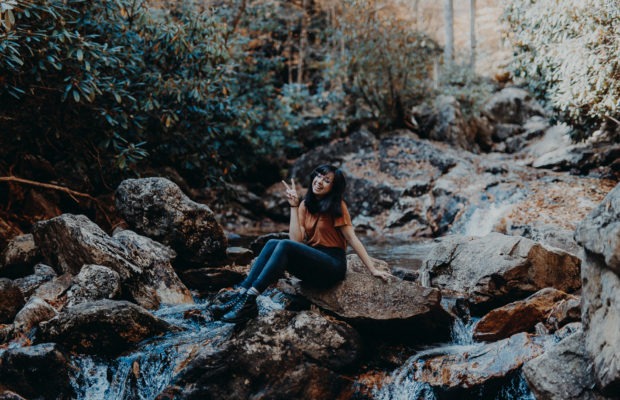 Florida-based photographer Kayla Surico has had her work shared in a number of ways including on merchandise for bands such as Knuckle Puck, Hungover, and Capstan and in advertisements for Glamour Kills Clothing. Contributing to Cherry Pit Mag, MTV, FlippenMusic, and New Noise Magazine, Kayla also spent this past fall on the road with Dayshell, Artifex Pereo, and I, The Mighty as they traveled across North America. Inthemidst of her busy schedule, we caught up with Kayla to talk about a number of things including how she discovered her unique style and point of view that has allowed her to stand out among other photographers in the industry.

I started showing an interest in photography at a young age. I was always playing around with my mom’s old cameras, and before I owned a camera of my own I would always take pictures of everything with my cell phone. When I was 16, I got my first DSLR and shortly after that was when I started shooting shows!

The actual first show that I shot was at a small venue/bar in Orlando and a few of my friends in some local bands were playing. I don’t usually count this as my first show that I shot though. The first time I received a photo pass for a concert was in November 2012 and it was for Mayday Parade and The Maine (two of my childhood favorite bands). The one thing I wish I would have done differently was to shoot using manual mode and in RAW instead of JPEG. I’m pretty sure I shot in creative auto when I shot my first show and unfortunately back then I still didn’t 100% understand exactly how my camera worked.

I feel like my style is constantly changing and evolving, but I think the best way to describe my shooting style would be somewhere along the lines of “artsy photo-journalistic” maybe? I mostly just enjoy capturing things how they are, but adding a bit of a twist when it comes to post processing. I’m always doing something weird when it comes to editing and I like experimenting with textures, layers, and color manipulation.

Your photographs have very distinct qualities that allow them to really stand out from other live images in the music industry. How did you discover your personal editing style?

First off, thank you! Second, I honestly get bored pretty easily so I’m constantly experimenting with different ways to edit and just over time I’ve figured out certain things that appeal to me.

Gif making is another concept you incorporate into your work. What made you decide to begin creating gifs and in your opinion, what makes a good gif?

I actually started making gifs years ago, back when I was super involved on Tumblr, but then I had stopped making them for a while. I got back into making them again sometime around last year and that’s also when I discovered that cinemagraphs were a thing (special thanks to Rex, aka @brownmetal, for showing me them and teaching me how to make them). I started to incorporate gifs into my music photography work because I thoroughly enjoyed making them and I think they helped me stand out a bit in the industry.

I personally prefer gifs that loop smoothly, where you can’t really tell when it starts or begins. The “jump” that most gifs have kind of bug me a little bit sometimes. This stuff is all subjective anyways though, so who cares what I think. All gifs are pretty cool. Movement is cool.

I’m super torn between this one photograph I took of Melanie Martinez and a photo I took of my boyfriend, Chase, who’s in a band called Boxing At The Zoo. With both of these photos I got pretty experimental.

This photo of Melanie Martinez is one of my favorites because I felt super inspired by her style and music to do something really weird and different in post processing, and I love how it turned out. This picture even got shared on Instagram’s Music page which was sick!

This photo of Chase is also one of my recent favorites. His band hired me to shoot one of their shows a few months back where they played at this super tiny, DIY venue in Orlando called Spacebar. That venue was DARK. Like I walked in, saw the amount of light inside, and wanted to cry – dark. The only thing lighting up the room was a cool looking light constantly moving around in the top corner plus a screen displaying the movie “Mr. Nobody”. Throughout the set, I was constantly using a shutter speed slower than 1/50 along with a wide open aperture and a high ISO. It was very frustrating, but I surprised myself with the shots that I was able to get. I try my best to make local bands look bad ass and like rock stars, and I think with this photo I accomplished that.

Boxing At The Zoo

I love shooting bands who just go absolutely nuts on stage. I love having fun while photographing people who are also having fun. Most of the time, you can actually spot me singing and dancing along while I shoot.

Your work has been featured in magazines such as New Noise, on merchandise for Knuckle Puck and Capstan, and in advertisements with Glamour Kills. Over the years, has there been a particular project you got to be involved with that stands out as something you are especially proud of? Why?

I actually just finished working on a project for Equal Vision Records that I am super proud of! Natalie Bisignano from EVR contacted me about working on some cinemagraphs for them and an artist they recently signed called OWEL. I basically created cinemagraphs for their new album, Dear Me,  for them to use when streaming the songs on YouTube. At the beginning of this year, one of my main goals was to create cinemagraphs to go along with an artist’s music so it was awesome being able to accomplish that.

I’m always trying to find different ways to stand out whether it be how I shoot and edit or create things like gifs and cinemagraphs, but usually, I don’t think about it too much. Most of my friends are actually photographers/artists and I just think it’s best for us to all view each other as friends and learn from one another, rather than view each other as competition.

As a photographer who is very active on her social media accounts, what importance do you feel social media websites such as Twitter, Facebook and Instagram hold in your career and the career of photographers around the world?

Personally, I think all photographers should take advantage of social media sites because they can be super helpful when it comes to networking and getting your work out there and noticed. A lot of the jobs and opportunities I’ve gotten have been because of social media!

Keep shooting, don’t limit yourself, never be afraid to experiment, and always remember to have fun. If you’re not always striving to learn and improve and enjoy yourself while doing it, then what’s the point?

Portrait of Kayla by Chase Bauduin