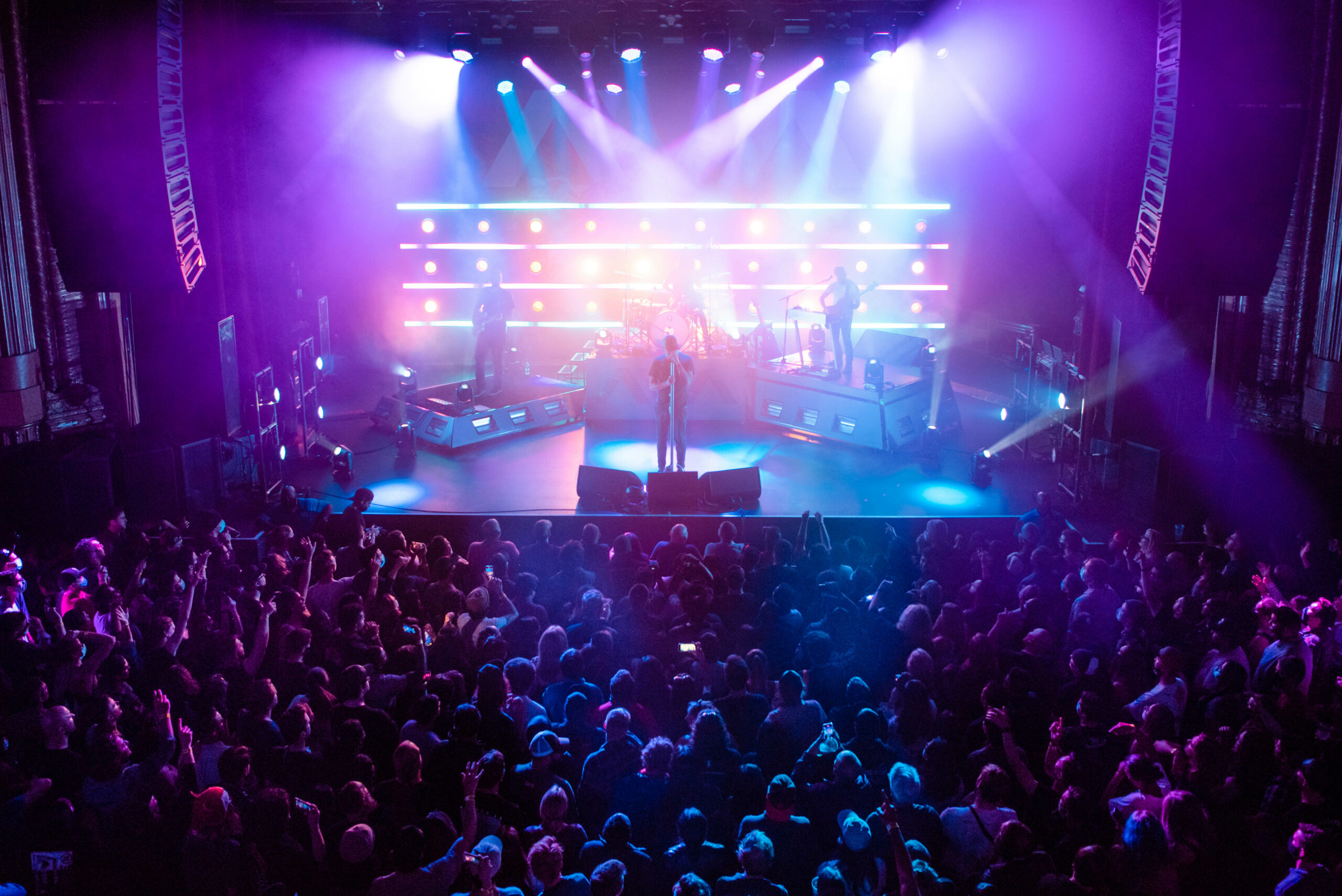 Alt-rock band Angels & Airwaves brought the second stop of their Lifeforms tour to San Francisco last Thursday, delighting fans and proving that the group is still going strong after 15 years together. The group, headed by former Blink-182 frontman Tom DeLonge, is touring in support of their latest album of the same name. Performing at the iconic Warfield Venue on Market Street, Angels and Airwaves easily commanded the stage with an ease that only such a practiced band could deliver.

First opening band 1990nowhere kicked off the show with a rousing set to warm up the crowd. Though the LA-based group is relatively new—they shared with the audience that this performance was only their second time playing together—the individual members are far from newcomers. Comprised of talents like Chris Blair and Bryan Sammis, who perform solo as Lostboycrow and Olivver the Kid, respectively, 1990nowhere is no stranger to the stage. Breezing through several upbeat songs, the band kept the crowd engaged with easy stage presence and high-energy indie-rock vibes.

Another rock band hailing from SoCal, Bad Suns, was up next, revving the crowd with one of their most popular hits, the pulsing “Daft Pretty Boys”. The group’s onstage persona leans into their 80s-inspired sound, all shaggy hair, platform boots, and an almost-too-cool-for-you presence. Throughout their set, Bad Suns, sprinkled in new songs from upcoming album “Apocalypse Whenever,” sparking excitement for the January release. Finishing with the undeniably catchy “Cardiac Arrest,” Bad Suns provided the perfect surge of energy to stoke the excitement for Angels and Airwaves.

Almost three hours after doors opened (and plenty of anticipation later), it was time for the headliners to take the stage. The crowd’s already palpable eagerness exploded once the house lights dimmed as the stage lights illuminated the band’s impressive onstage setup. Despite the electric energy from the audience, the band members entered without much fanfare as they took their spots onstage and launched into “Kiss and Tell.” In fact, the first several songs were without any commentary from the band, a testament to the band’s skill and command of the stage.

That said, Tom DeLonge’s easy conversational style and sometimes manic energy had the audience hanging on his every word throughout the show. When introducing “Everything’s Magic,” DeLonge recounted how the song had been written for Shrek, telling the audience, “like you guys don’t get turned on too by that fucking movie!” Later, when asking the crowd to guess what was in his red Solo cup, DeLonge cackled “it’s semen!” then jokingly admonished the audience to “grow up!” Clearly, the longtime performer has mastered his stage presence, and employed his unique, frenetic sense of humor to keep the audience hanging onto his every word.

A clear highlight of the night was “The Adventure.” One of the band’s first releases, the epic 5-minute-long song is an expansive, atmospheric ode to life’s possibilities. Uplifting and sonically soaring, “The Adventure” swept the entire venue into its message of hope and wonder. At the song’s bridge, DeLonge held his microphone to the audience, who sang the song’s refrain, “I cannot live, I can’t breathe, unless you do this with me” in swelling harmony. The performance was as moving as it was beautiful, and served as a clear testament to DeLonge’s purpose for Angels and Airwaves: crafting an art project of larger human themes, rather than being “just a band.”

DeLonge and bandmates David Kennedy, Ilan Rubin, and Matt Rubano held the audience in rapt attention throughout old favorites like “The Wolfpack” and new favorites from LIFEFORMS like “Rebel Girl” and “Euphoria.” Angels and Airwaves chose “Heaven” to close out the performance, an apt choice given the tangible harmony and joy that the concert brought to fans and performers alike. It may be early in the tour, but Angels and Airwaves have decisively shown that they are stronger than ever.

Check out the galleries from each set below!