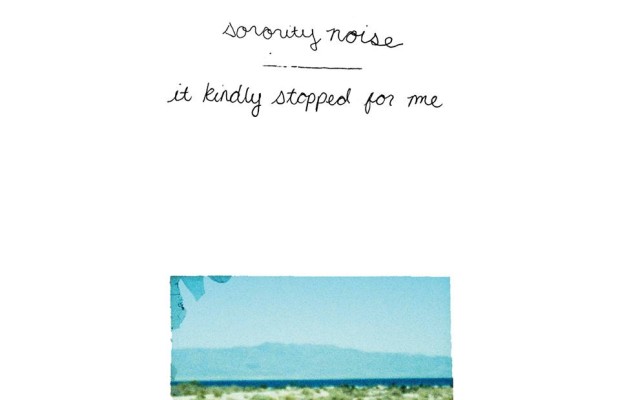 Connecticut-based band Sorority Noise released their EP It Kindly Stopped For Me today. The EP follows with the bands writing style, a style that allows them to unapologetically discuss topics that are often overlooked including, addiction, suicide and depression. In four folk-influenced unplugged rock songs, lead singer Cam Boucher pours out his heart and soul recounting the memories of friends that he lost during the summer and fall of 2015.

The opening song “Either Way”, opens with a soothing guitar melody that channels the memories of a youthful summer. The guitar flows throughout the song as Boucher’s voice echoes across, as if he was sitting on his porch in the summer heat reflecting on good times with good friends.

Each song on the EP flows seamlessly from one to the next, as the listener is welcomed deeper into the mind of Boucher with each passing lyric. “Fource” is arguably the most profound song on the record. It feels like a direct glimpse into a private moment between Boucher and his thoughts. The spoken word lyricism shows a vulnerability that is unmatched in any other song on the EP as you can hear the shaking of Boucher’s voice with each lyric. The song opens with a direct reference to his passing friends “We lost another one today./ That makes more than I can count on one hand.” Sorority Noise has succeeded at directly translating the feelings of loss and sorrow to the listener through the slow melodies and lyricism that is pulled directly from the aching heart of Boucher.

Sorority Noise has delivered an EP that shows a completely different side to the band – a side that is not filled with loud guitar and heavy drums, but a side that shows what is really going on inside. It takes an immense amount of bravery to share an experience like this and the band has beautifully crafted four slow yet powerful ballads that reach into the inner depths of anyone who has experienced such loss.

The band often second-guessed the release of this EP and questioned whether the songs were really meant to be released to the public or rather kept for personal use. It is safe to say that we as listeners are lucky that It Kindly Stopped For Me was released before they could change their mind.

Though the band has delivered something different than what listeners are used to, it’s a new sound that suits the band well. It Kindly Stopped For Me is a must listen for everyone.