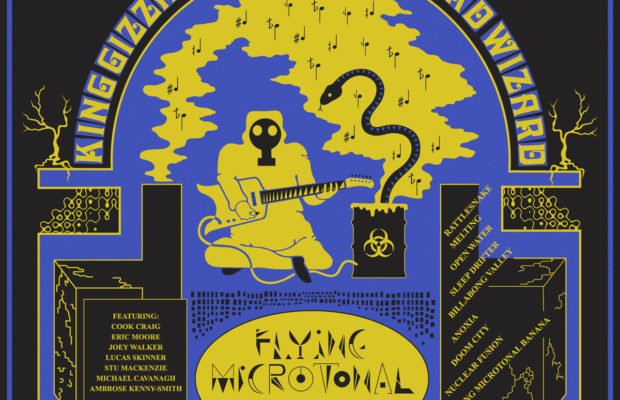 If you’re one for funky alternative rock ‘n’ roll and haven’t listened to King Gizzard and the Lizard Wizard yet, you’re doing it wrong. The seven piece band released their latest work, Flying Microtonal Banana, February 24th on ATO records. The band recently experimented with microtonal tunings, which means things in the music world are tuned to something smaller than your modern day half step. That inspired the album, hence the title Flying Microtonal Banana.

The band consists of seven members who are responsible for the creation of the eclectic range of music seen on Flying Microtonal Banana. The seven members include Stu Mackenzie on guitar and lead vocals, Joe Walker on guitar and vocals, Ambrose Kenny-Smith on harmonica and vocals, Eric Moore and Michael Cavanagh on drums, Lucas Skinner on bass, and Cook Craig on guitar.

The album is very very heavily focused on the microtonal instrumentals. Most of the music is just that – music with no lyrics. It showcases how the microtonal tuning changes the entire vibe and flow of the song.

Off of the album, “Doom City” and “Nuclear Fusion” really stood out to me as my favorites. I felt that these were the two strongest songs off of Flying Microtonal Banana. “Doom City” starts off darker, with a quick beat and deep instrumentals. It soon transforms into a San Cisco-esque verse and chorus, with grungy vocals and unique background sounds that come from the microtonal instruments. “Nuclear Fusion” has a funky yet jazzy feel to it. Along the lines of something that Two Door Cinema Club would put out, “Nuclear Fusion” is a jam.

Remember to pick up a copy of King Gizzard and the Lizard Wizard’s album Flying Microtonal Banana on ATO records.