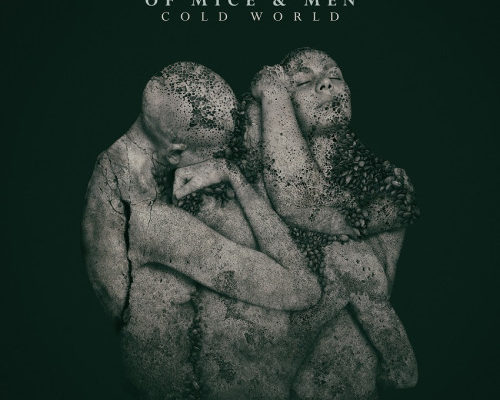 It’s not often that a metalcore band can blend an angry, loud sound with peaceful, practically calm vocals and lyrics. Often, one is sacrificed for the other, making an enjoyable album, but perhaps not a multi-dimensional one. Of Mice and Men have built a considerable fan base over the years, initially drawing attention thanks to vocalist Austin Carlile’s previous work in Attack Attack! With the release of their fourth studio album, Cold World, the California quintet have honed their sound to a fine point and delivered a powerful record that will appeal to both longtime fans and new listeners.

The opening track “Game of War”, is one of the most powerful tracks on the album. Vocalist Austin Carlile and bassist Aaron Pauley share lyrical responsibility, harmonizing to a melody that feels reminiscent of a cold, steel future. Reminiscent of contemporaries such as The Devil Wears Prada and Atreyu, OM&M’s five-piece instrumentals frequently sound like an orchestra of guitars, synths, and pounding drums. It’s easy to believe that this clever band alone can flood headphones and concert halls with this power, but nonetheless, it’s impressive.

Cold World’s single “Pain”, may be the heaviest song on the record, sending blood-curdling roars through speakers. “Pain every day that I awake, in my blood and through my veins, now there’s nothing left that you can take away from me!” Lyrics like this put percussionist Valentino Arteaga’s angry and precise rhythm at the helm, while guitarists Phil Manansala and Alan Ashby drive the melody: cold, livid, and worthy of a chart-topping hit.

While the album doesn’t feel as aggressive as some of their other work, the slow-paced tracks on this record often steal the spotlight from the classic metalcore songs. Those songs that sound like “classic” OM&M are solid, but can feel like Deja vu. Cold World solidifies the band’s place in the genre, but when Carlile croons rather than screams, the record truly shines.