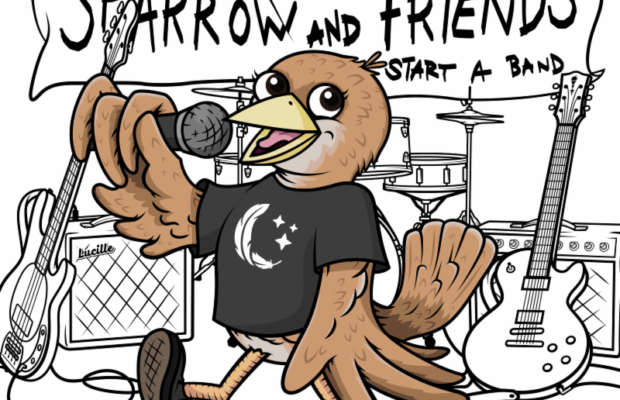 Sparrow Sleeps has been producing cover albums of notable pop punk albums for a few years now – but what sets them apart is that the renditions are all in the form of lullabies, meant for parents and siblings to play around young children, toddlers, and babies.

Sparrow Sleeps has put out covers of tracks by Brand New, My Chemical Romance, Paramore, Beach Slang, and more. With their newest release, Sparrow and Friends Start A Band, Sparrow Sleeps has combined pop punk and child-friendly music in a whole new way. Like when Anthony Green (Circa Survive) released Young Legs, an album directed towards toddlers and children, Sparrow has not only used soothing instrumentation, but incorporated vocals from a variety of pop punk band members.

For example, on the track “Sharing Is Cool,” Real Friends vocalist Dan Lambton and Knuckle Puck vocalist Joe Taylor sing together, explaining what sharing is, and that they can take turns using each other’s instruments. In this way, the song is reminiscent of Fischer-Price sing-along albums that teach preschoolers about how to interact and treat one another. The key difference, however, is that each song on Start a Band is a lot less gentle and calm, and a lot more vibrant.

Each song has a very bouncy, rock vibe, and is very much written in a pop punk style. Overall, the album is just that. A pop punk album for kids. Each song hits on topics that small children can relate to, but does not do so in an immature way. “The Sugar Song” features vocalists Kaitlynn West (Tiny Stills) and Tony Thaxton (Motion City Soundtrack). West sings about how she wants to only eat sweets all day, while Thaxton explains to her that she can (and needs to) eat healthy food, too. This is not only a cute way for parents to teach their kids the value in eating healthy, it’s also extremely catchy and fun.

Overall, parents, siblings, and even teachers with a taste for pop punk will love this album from beginning to end. Instead of having to sit through long car rides listening to Fischer-Price nursery rhymes, or having to censor their playlists around the kids, they can just put this album on shuffle and not have to worry about agitation or offensiveness. Sparrow Sleeps has broken pretty new ground with Start a Band.