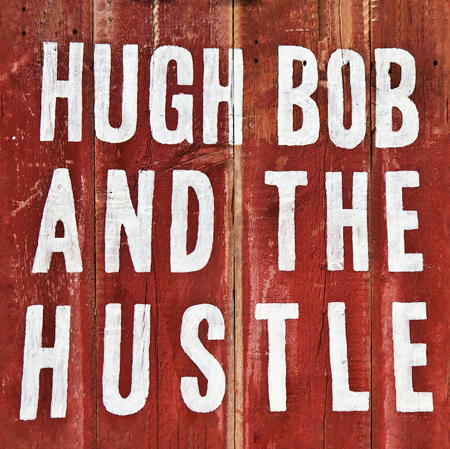 Hailing from a Wisconsin town that comfortably holds three hundred people, Hugh Bob & The Hustle are probably one of the most original things to leave the state (besides dairy products, of course). Their self-titled debut album does not fall shy of incredible in the soulful Americana sound that radiates off this latest release.

During this music era that is dominated by over edited pop songs and dubstep beats, Hugh Bob & The Hustle are the refreshing sound we have been looking for. Opening their album with “Ashland Country”, that opening hook resembles something that could be found off of Ryan Adam’s Easy Tiger, showing the soul that this band pours into their music. The slow tempo of the song mixed with the light percussions and country filled guitar riffs are anything, but extraordinary, greatly showing the craftsmanship Hugh Bob & The Hustle possess.

The self titled album’s biggest standout song would have to be “North Country”, the perfect country rock song for anyone. With a sound that could have come out of good seventies country-rock band, Hugh Bob & The Hustle shows versatility on this album, “North Country” being the prime example of just how quality their music can be. Between the poetic lyrics and professionally crafted breakdowns in the track, its hard to believe that this is their first album. When music groups release their first album, it can be unclear what sound they are striving for or what direction they want to go, but its crystal clear that Hugh Bob & The Hustle are ready to take the soulful country-rock world by a storm.

The frontman of the group, Hugh Robert Materson, has had quite the experience in the music business. As a sideline bassist for the noted band Jaill, Hugh eventually decided to form Hugh Bob & The Hustle and step out as a singer-songwriter, every track on this debut record being some of the first he has ever written. For Hugh, the undertone of experience in each song on this album is what gives Hugh Bob & The Hustle an upper hand above many other artists in the genre.

Their latest single “Butternut” is the track that everyone should take a listening to. Written about the small town that Hugh is from, he sings about how Butternut will forever hold a lasting impact on him, no matter where he might be. As the perfect rugged country song, the ode to the Wisconsin town not only shows where Hugh Bob & The Hustle are from, but also that no matter what, they will never forget their roots.

Hugh Bob & The Hustle could not have come at a better time, with a first album that is as strong as this one, don’t be surprised if you hear about them in the near future. With experience and craftsmanship in their arsenal, this small town band is well on their way to the top.