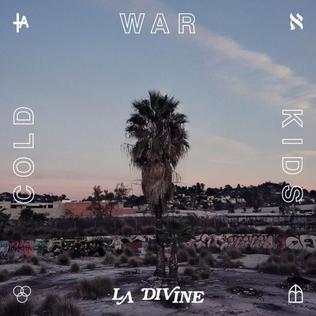 Cold War Kids’ single “Love Is Mystical” shows a refreshing side to the California indie rockers. Flowers of different colors dispersed throughout the scene as people donned in white clothing partake in passionate embraces, a beautiful image for a powerful statement. Using their music and lyricism to unleash powerful and sometimes political statements, Long Beach based band Cold War Kids have delivered listeners with their sixth studio album, L.A. Divine. What, in sound, is an homage to their sand covered hometown, is actually a collection of 14 lyrically packed songs to pull on the heart strings of the listener and push people to truly think.

L.A. Divine opens with the hit single “Love Is Mystical,” before transitioning into a more classical Cold War Kids sounding track “Can We Hang On?” A song about a dwindling love and a craving to get back to the better days. Lead vocalist Nathan Willett sings with an extreme passion within his voice as he belts the lyrics, “I think about the old days what we been through to survive, do we get better with time?” The guitar driven “Open Up The Heavens” is one of the more upbeat tracks on this record. Willett sings with a grime and grit in his voice so as to portray that “don’t mess with me” vibe.

Throughout the album, there are pauses that feature Willet speaking about different things. In “Wilkshire Protest,” the opening lyrics are pull on the strings of today’s political climate, “I am marching with the protest. I got so much to say, but I’m only here to witness.” The following track “Luck Down” is one that touches on one of the recurring themes throughout the album: romance. The lyrics detail a struggle with a loved one who is suffering. The closing verse details the battle of a loved one suffering, “I won’t lecture you on Lexipro. You Won’t hear me out Selexa no, you’d rather medicate with every pour. I’m looking out for you, it’s you that I adore.”

The album concludes with the piano ballad “Free To Breathe,” which turns a more reflective view on the relationship that has been documented throughout the record. The strongest part of Cold War Kids is their ability to take a song that is seemingly about a relationship and provide the listener with profound undertones. It’s simply impossible for the closing lines of the track and entire album to not resonate with you as Willett sings, “World is changing, can you feel the tension? If you’re not angry, you must not be listening”.

Cold War Kids are no strangers to the scene, in fact, they’re veterans of alternative rock. Over the decade and a few years since they came onto the scene, they’ve worked vigorously to create their own distinct sound. They have succeeded, but have also taken that sound to a new and more engaging level on L.A. Divine. This album sees a diverse range of sound and a greater maturity both instrumentally and lyrically.