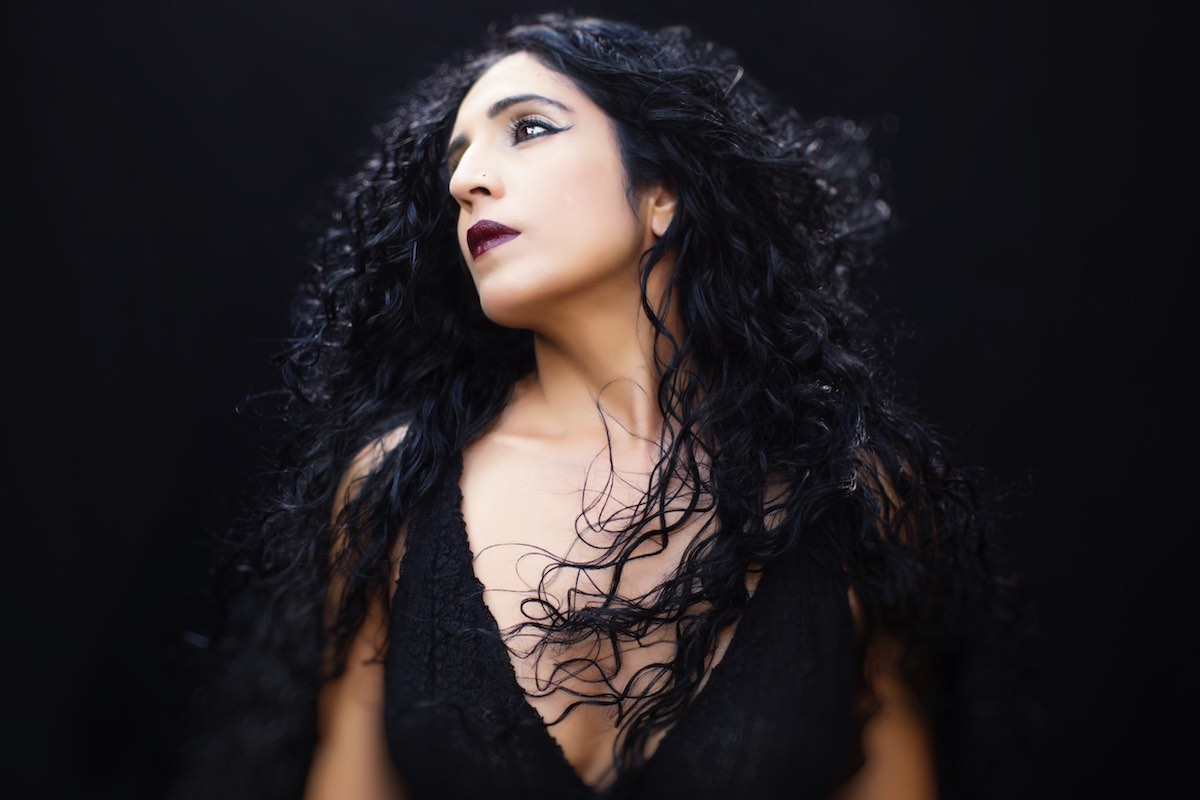 Embracing the sleek menacing beats and anxious ethereal vocals, while adding her own icy cinematic veil, internationally beloved singer-songwriter/producer Azam Ali has just released the video for her cover of Cocteau Twins’ “Shallow Then Halo” via Post-Punk.com.  The track is her third single from upcoming album Phantoms (Out tomorrow, Friday, September 13th via Terrestrial Lane Productions).  The live video was shot during her recent show at DROM in New York City.  Glowing with the boreal lights and cold mist of the stage, Azam, backed by Loga Ramin Torkian on the GuitarViol and Gabriel Ethier on synthesizer, resolutely introduces the biting electric rhythm while seamlessly layering on the fluid and chilling vocals.  “As my album began to take shape, I realized I was subconsciously tapping into so much of the music from the ’80s and ’90s that had inspired my musical journey,” reflects Azam on her decision to cover Cocteau Twins. “My reason for wanting to cover a CT song was out of sheer love for their music, the influence they had on my life and art, and a desire to pay tribute to artists who had shown me the profound potential of music to reach sublime depths.  So it is from this place of reverence that I attempted not to cover the song per say, but to sing and produce it as if it were a part of me and my personal expression.  I truly internalized it and made it my own.  I also particularly chose one of their less popular songs as a silent nod to other hardcore CT fans.”  “The concept behind the album, in essence, is about how we develop multidimensional selves, a series of personas if you will, that enable us to navigate in a multidimensional universe and how we learn to move between them very fluidly. Over time, these personas become like ghosts that live within us… like phantoms.”  Her first album sung completely in English, the multicultural artist (born in Tehran, lived in India till she was four, and then came to America in 1985 after the Iranian revolution of 1979) studied music from a global perspective, soaking up the sounds and traditions from the Middle East, India, U.S., and Eastern Europe, among many other regions.  “I have sung many songs in English over the years, but this is the first album I have sung entirely in English,” she explains.  “I waited this long to do an entirely English album because I wanted to be sure that I was doing it for the right artistic reasons, and that the production would be on a par with those of my musical idols who have inspired me.”

Azam’s career began in the chart-topping and ground-breaking international world electronic/ acoustic group Niyaz. As a solo artist, Azam has received two Canadian JUNO Award nominations and one HMMA (Hollywood Music in Media Award) for her bold artistry. She has collaborated either in-studio or on stage with Serj Tankian of System of a Down, Peter Murphy of Bauhaus, The Crystal Method and Mickey Hart, among many others.  She’s contributed to film and television soundtracks including Thor-The Dark World, Matrix- Revolutions, 300, The Fight Club, Dawn of the Dead, True Blood, Alias, The Agency, and Prison Break.  She is also a well-known musical force in the video game world, contributing to games like Uncharted 3, Call of Duty, Prince of Persia: The Forgotten Sands and Syphon Filter: Logan’s Shadow for which she won “Best Original Song” at the Hollywood Music in Media Awards in 2007.  With Phantoms, Azam Ali found herself unconsciously invoking the spectres of her past. “It was during that period of my youth that I first became infatuated with technology and its immense power as both a destructive and creative tool. Before Phantoms, I’ve shared a lot of intimate emotions, but it’s been a long time since I have been this vulnerable. It’s truly liberating.”  The album was composed, recorded and produced by Azam Ali and mixed  by Grammy-nominated engineer Michael Patterson (Beck, Notorious B.I.G., Atticus Ross, NIN, The Social Network soundtrack).  You can follow Azam Ali and stay up-to-date on all upcoming album, artist and tour news via the following links.  Check out the video for “Hope” from the new album below.  Photo Credit: Borna Jafari.