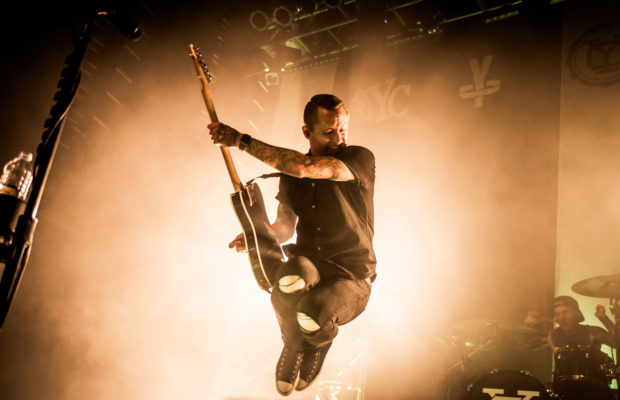 Yellowcard blew through San Diego on their final tour bringing with them the Indie rock group Dryjacket and alternative rock band Like Torches. The jersey boys from Dryjacket set off the evening with their upbeat, melodic songs with a little bit of edge thrown in for good measure.  They eased us into the next act, Like Torches, who brought a faster pace and a humor to their set that had the audience laughing and dancing along. Hailing from Sweden, the alternative rockers set up the energy level for Yellowcard’s entrance and even gave them a member. Drummer Jimmy Brunkvist was asked by Yellowcard to learn over 30 songs without the benefit of practicing with them and do double duty on this tour. And he succeeded. Performing with Like Torches and then turning around and hitting the skins for Yellowcard, you couldn’t tell he hadn’t been a long time member which is a testament to his talent. Yellowcard started their set with the 9/11 tribute song to first responders “Believe” and then wove the crowd from one song to the next with their massive energy and stage antics. Violinist, Sean Mackin, even landed his backflip from the drum riser. Slowing down only a bit to do an acoustic version of “Empty Apartment” and “October Nights”; which it was one, they picked it back up and ended the night with their biggest song “Ocean Avenue”; which at most points, the crowd sang back just as loud as the band did. Farewell Yellowcard and thank you for the memories.