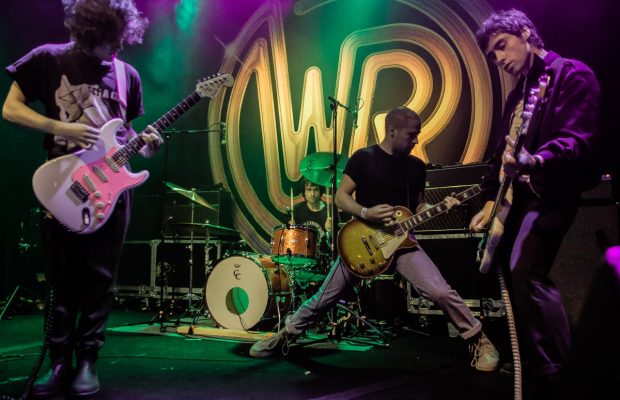 Beloved hometown band Whiter Reaper recently performed in Louisville while on tour with Twen, performing to a sold-out crowd of fans.  With plenty of fun energy and excitement in the air, it was clear that everyone at the show was ready to have a good time this evening.  Starting things out was Buddy Crime, the solo project of Louisville artist William Carpenter.  With wild hair, sunglasses and clad in a bright orange jumpsuit, Carpenter proceeded to give the crowd a high-energy set, dancing across the stage and getting into the crowd often during his set.  He had the crowd dancing in no time!  Next up was Nashville indie pop band Twen, fronted by singer Jane Fitzsimmons and guitarist/vocalist Ian Jones.  They put on an incredible show this evening.  Fitzsimmons is an incredibly expressive singer and spent much of the set barefoot, dancing around the stage and chatting a bit between songs to engage the crowd.  It was apparent that they love being up on stage and performing and radiated a fun energy out into the crowd.  With a dreamy, psychedelic sound, they kept the crowd moving and in high spirits.  I have no doubt they made plenty of new fans this evening.  Headlining this evening was White Reaper, which received a roar of cheers and applause and they walked onto the stage.  They are an incredibly fun live band, with plenty of interaction amongst members on stage and with the audience!  They started things off with “Make Me Wanna Die” and performed a great set that included “Little Silver Cross”, “Might Be Right”, “Sheila” and “The World’s Best American Band”.  With an infectiously upbeat energy, they kept the crowd dancing and singing along for their entire set.  There were also 2 inflatable beach balls being tossed around the crowd and a confetti cannon that went off at the beginning of the set which added another element of fun to the evening!  They ended their set with a cover of “Summer of 69” that led into their hit song “Judy French”.  All three bands gave the crowd a great evening of music!