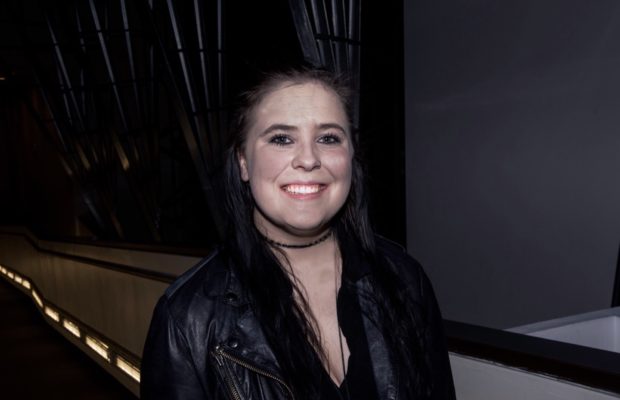 Chicago-based photographer Gina Scarpino has had the opportunity to photograph a number of acts over the years including Ellie Goulding, Cage The Elephant, and James Bay. From her energy-packed images to her ability to capture vulnerable moments of musicians many miss, Gina is taking her unique perspective and making something original out of it. We caught up with Gina and she opened up about who her favorite acts to photograph over the years have been, the story behind one of her favorite images, and more.

I first started showing an interest in photography in middle school. I used to play around with my parent’s point-and-shoot camera when we went on family vacations and then I eventually got my own as a present one year. I had my point-and-shoot for a long time, and I learned a lot about technique and such just from messing around and taking pictures of my friends. Then I got my first DSLR my sophomore year of high school and started to get more serious about photography once I started working for my high school newspaper, of which I eventually became the photo editor. I didn’t take up concert photography until I went off to college and ever since my freshman year of college, I’ve primarily been focused on photographing musicians.

I kind of feel like I had two first shows. The first show I ever shot was You Me At Six, Tonight Alive, and Dinosaur Pile-Up at the Bottom Lounge in Chicago. It was maybe three weeks into my freshman year of college and I had no idea what I was doing. The show didn’t have a photo pit and the crowd was insane, so shooting was kind of a struggle. But a week after that show, I got my first official photo pass to shoot one of my favorite bands, The Maine, and that was awesome. I still had no idea what I was doing, but the pictures didn’t come out terrible, which I was pretty thrilled about at the time.

It’s so hard to pick one artist, but I’d have to say Cage The Elephant and Ellie Goulding probably tie for first. Cage The Elephant is one of my favorite bands and I had been dying to shoot them for such a long time. I finally got to photograph them in December 2016 and it was easily the most fun I’ve had at a show. Ellie Goulding is also so much fun to shoot. I’ve photographed her twice and the first time was in May 2016 on the Delirium Tour and it was the first arena show I’ve ever shot. I’m really hard on myself a lot of the time, and the photos from the show were really the first time I ever felt really proud of my photo work, which was such an awesome feeling.

You are currently majoring in music business and minoring in journalism at university. In what ways do you feel your chosen studies have helped your career as a photographer and what is your opinion on those who are looking to major in photography at university?

I really started to get serious about photography because of journalism. It helped me fall in love with telling people’s stories in a visual context. Majoring in Music Business has really helped me with understanding live shows and appreciating everything that goes into making a concert happen. Learning about Music Business in school has also helped me learn how to work with and interact with professionals in the music industry, too. I think that majoring in photography can be really beneficial for a lot of people. For me, it was just easier to mess around with my camera and Google photography tips to learn about photography. But it can be hard to motivate yourself to commit to teaching yourself new skills, so I think photography classes or majoring in photography can be really beneficial for some people. It really just depends on how you learn.

With your future degree from Columbia College in Chicago, are you looking to pursue photography full-time or venture more into the music business side of the industry? What made you decide to go this route?

Music photography has become a huge part of my life over the last 3 ½ years, and I never intended for it to become such a vital part of my life. When I graduate this spring, the goal is to go into the business side of the industry because that’s really the side of it that I’m most interested in. If more opportunities in music photography opportunities present themselves, then I would love to do it professionally for a while, but not for forever.

Catfish and the Bottlemen

One of my favorite photos is one I took of Mod Sun in November 2016. During the second song in his set, we made eye contact and I shot this series of him crawling across the stage towards me. He was staring straight into my camera lens the entire time and when he got to the edge of the stage, he grabbed my camera lens and shook it around and then got up and carried on with his set. I couldn’t stop laughing the entire time, it was so funny.

There are so many things that can go into making a good photograph, but I think that thinking outside of the box and trying new things is what makes some of the best photographs.

Your work has been featured in a number of publications and on so many different artists’ Instagrams and social media accounts over the years. Has there been a particular moment or collaboration with your work that stands out as being something you are especially proud of? Which is it and why?

I think the most exciting moment was probably when Ellie Goulding re-posted one of my photos on Instagram a few months ago. I’m a huge fan of her music and I wish I was kidding when I say that I threw my phone across my living room when I saw that she reposted my photo.

As an artist who is pretty active on her social media accounts, do you feel as though social media platforms have helped your career in any way? If so, how?

Social media has been such a crucial part of building my photography career. I’ve been presented with a lot of really cool opportunities as a result of posting photos on social media. Some of my favorite photo gigs have come as a result of my photos just getting traction online which is kind of crazy. I’ve also become friends with photographers from all over the world, which is awesome! It’s so inspiring to see how other people work and it pushes me extra hard to grow as a photographer.

As 2017 continues on, are there any bands you are hoping to photograph this year or projects you are working on you can tell us about?

I don’t really have any projects in the works currently. I’m just going to keep on grinding and shooting shows and connecting with people while I work on finishing college this spring. But my goal for the year is to photograph a big music festival. I don’t know what festival, but I’m determined to make it happen.

I think just throwing yourself into shooting shows is the best way to do it. It takes a lot of practice to get in the groove, so the best thing to do is just shoot as many shows as you can. Don’t be afraid of grain in your photos, learn to embrace it. Be nice and courteous to everyone you work with and to everyone in the photo pit at shows. Don’t be afraid to put yourself out there and network with / befriend other photographers because those connections can get you a lot farther than you think!

Photo of Gina by Addie Whelan