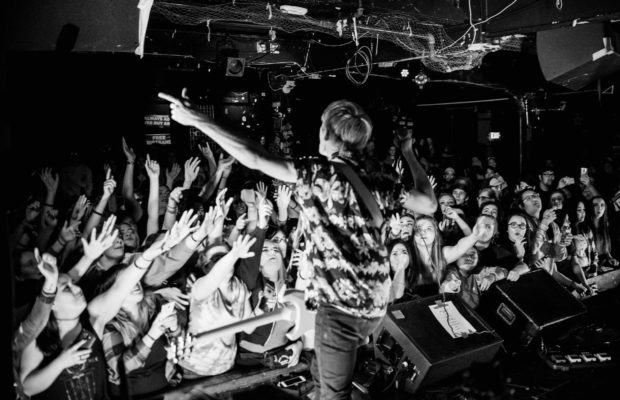 Things started off a bit bumpy for the Waterparks and Too Close To Touch co-headlining tour in Seattle last week. After running into van problems that delayed their travels, the tour’s supporting act Creeper were ultimately unable to make it to the show.

Despite these setbacks, and Creeper being forced to cancel their first show in the history of the band, Seattle fans were treated to a night of entertainment, high energy, and nothing but good music.

Following the release of their debut full-length album, Double Dare, late last year, Texas-based pop rock band Waterparks have been making waves in the scene and gaining momentum with each and every tour they do. After swinging through Seattle at the end of last year on the Sleeping With Sirens tour, local fans had been waiting for a headlining show from the band for quite some time.

Opening up their set with “Made in America,” the crowd erupted into cheers the second the band took to the stage and, well, the screams really never stopped. Fans were squeezed up right against the stage, singing as loud as vocalist Awsten Knight throughout the night, showing their dedication and love for the rather fresh band on the scene.

Their set list, which was packed with ten songs, satisfied everyone in the crowd who had been waiting to see a longer performance from the band. Included in their set were hits such as “Hawaii (Stay Awake)” and “Stupid For You,” both tracks receiving an incredible amount of energy from the crowd.

The guys in Waterparks managed to throw in some of the famous banter they are known for, taking breaks in their set to talk with fans, throw around a jumbo box of Goldfish crackers a fan brought along for them, and even grind up on El Corazon’s infamous sticker-covered stage pole (yes, it was Awsten who did that).

Closing their set with “Royal,” notably one of their most popular songs to date, the members of Waterparks hadn’t even left the stage for a minute before fans began buzzing about the next time the electrifyingly entertaining trio would be in Seattle next.

Living up to their reputation, Too Close To Touch closed out the night with an unforgettably energetic performance. Playing twelve songs in their set that covered much of their discography including their recently released album, Haven’t Been Myself, their performance proved why they have been sharply rising in popularity.

Each member brings something different to the band and are able to connect with each fan in the crowd in some way, whether they are right up front or in the way back. Together, they help to form this cohesive band that is able to translate their music from album recordings to live shows so effortlessly that the sounds are almost interchangeable.

Playing songs off of their latest release including “Miss Your Face,” “Crooked Smile,” and “What A Shame,” fans were in for an unexpected surprise as the band closed with “Eiley.” Written about the passing of Keaton’s little sister, the emotional song was one that Keaton believed he would never be able to play live. After some thought and consideration, the track was added to their set list for this tour and makes for an unforgettably raw and emotional send off for the band.

This tour has something special to offer that other tours lack – fresh and exciting talent the world needs to know about. Whether you have followed these bands for years or are just being introduced to them like so many of us are, each band brings something different to the tour that is pleasing old fans and intriguing new listeners across the nation.

There are a few weeks left of this tour and while Seattle missed out on Creeper, make sure to check out the remaining dates and see if these bands are coming through your city soon!