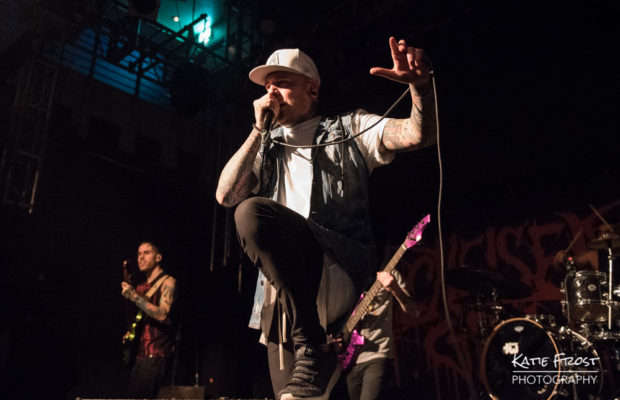 Friday night saw US deathcore six-piece Chelsea Grin play the final date of the UK-leg of their mammoth European tour, at O2 Academy Islington with support from Betraying The Martyrs, Make Them Suffer and Void of Vision.

Doors opened at 6.00pm (as opposed to 7.00pm advertised on the venue website), which meant the crowd was a bit sparse for the first hour or so, but that didn’t stop Aussie five-piece Void Of Vision bounding around the stage giving it everything they had. The Melbourne-based metalcore boys all wore matching “VOID” baseball jerseys and fired out tracks from their debut album Children of Chrome, which was released last year.

Fellow Aussies Make Them Suffer were next on stage, bringing their blend of “firery hardcore and gothic misery” to the steadily filling room., and their female keyboardist brought welcome relief from the sausage-fest line-up of the evening.

Main support were Betraying The Martyrs who were extremely popular with the now packed room and initiated many walls of death and circle pits…to the delight of the venue security.  The six-piece from Paris (and Leicester) put on an energetic and intense performance from start to finish show-casing their unique sound of deathcore with theatrical melodic flourishes.

Headlining the evening were the mighty Chelsea Grin, who are celebrating their ten-year anniversary this year. The band showcased tracks from their fourth studio album Self Inflicted, which was released last summer and put on a fantastically tight and high-energy performance, led by charismatic frontman Alex Koehler.

After completing their UK / European tour, Chelsea Grin head back to the US to play a string of dates up and down the country. Full tour dates can be found on their website: http://www.chelseagrinmusic.com/tour-dates