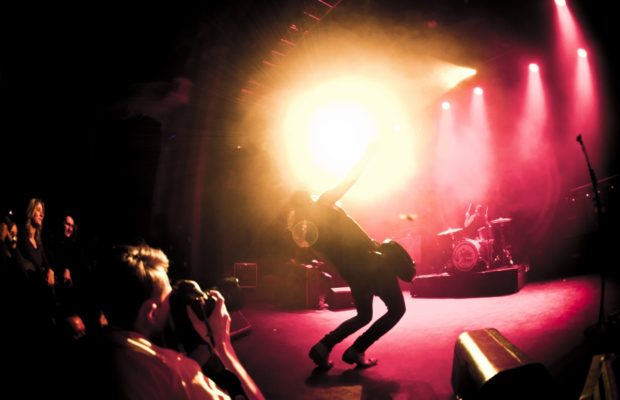 Upon arrival, a definite theme quickly became apparent:plaid shirts, bandanas and ponytails filled the entrance of theO2Shepherd’s Bush Empire. As we entered the theatre, we were struck by two things, the beauty of the room, and the sheer volume of people. The place was absolutely packed! Barely able to push through the crowds, we settled for a spot with a decent enough view. There was an air of anticipation as the lights dropped to allow The Cadillac Three to take to the stage, and as the lights went back up, a sea of bull horns and glasses were raised to greet the band,these guys have a devoted following.

For only a three piece with no bass player, The Cadillac Three produce a wall of sound, you could be forgiven for thinking that Jaren Johnston’s thick distorted guitar tone and wall of amplifiers are creating this, the real secret in fact, comes from the left side of the stage. Kelby Ray plays a lap steel guitar called a Dobro, at his feet are two volume pedals, one for bass and one for guitar, that run to both a guitar amp and a bass amp, creating the sound of the bass while still playing the lap steel-it’s clever stuff and really fills the sound. They enigmatically make their way through a rich catalogue of crowd favourites such as, ‘Drunk Like You’, ‘Party Like You’ and ‘White Lightening’, a song that sounds very much how Kings of Leon perhaps should sound now… but don’t.

It’s strange to hear a mostly British audience singing along enthusiastically to every word in a thick southern American drawl, but this band do seem to have that pull on their fans, it’s more of a lifestyle than anything, like being a biker or a line dancer. The Cadillac Three play heavy, country rock, drenched in tales of whisky, heartbreak and living in the south. The die hard fans are loving every moment tonight, whether it be the infectious riff laden guitar, the authentic country blues sound of the Dobro, or the hard hitting beats of the hugely entertaining drummer Neil Mason, who could potentially be the most entertaining of the three. While taking nothing away from the Johnston and Ray, who are both charismatic and entertaining, Neil Mason is hugely animated behind the kit, often standing over his drums, gesturing to the audience. Towards the end of the show the band invites support act Tyler Bryant &The Shakedown to the stage for the encore and the crowd could not be more thrilled, with both Tyler and Jaren trading vocal duties and as many guitars as the stage could handle, it was a fantastic spectacle to end the night. Before we knew it, the lights were up and a sea of (now unstable on their feet) plaid shirts, baseball caps and bandanas filed out of the venue and on to the streets of London. The Cadillac Three are a drinking band ladies and gentlemen, the band kept up their end of the deal, so it seems, did the fans.