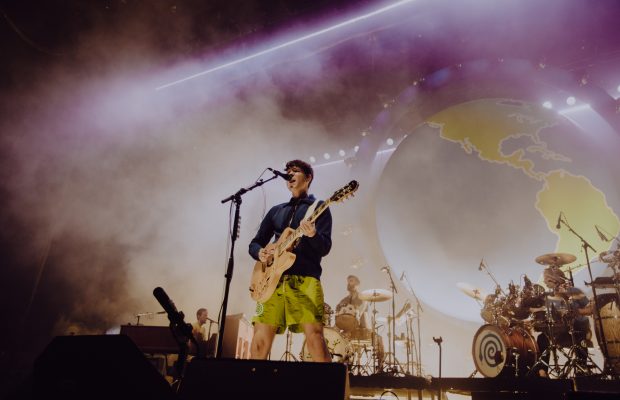 On August 18, 2019, Vampire Weekend hosted a night of musical wonderment at Toyota Music Factory in Dallas, TX. The show opened with blues artist Christone “Kingfish” Ingram from Clarksdale, MS. Kingfish pumped up the crowd with his wailing guitar solos that extended all of his songs to be about 5-10 minutes long. Kingfish displayed incredible talent on the guitar, even playing the guitar with his teeth. The crowd was amazed by his performance.

Vampire Weekend took the stage and opened the show with a song off their new album, Father of The Bride, titled Bambina. The Dallas crowd grew alive as they saw the band perform live in their city for the first time in over 5 years. The band played through songs from their whole discography, but highlighted tracks from their 2019 album. One of the most incredible moments in the set was the band’s performance of “Step” from their previous 2013 album, Modern Vampires of the City. The song sent chills down my spine, and in that moment, that performance musically defined nostalgia. They followed “Step” with “Sympathy,” from the newest album. Sympathy had the best stage production of the whole show, with an incredible strobe light performance. The song is still stuck in my head, and the band members displayed their incredible instrumental talent on this track. The show finished with a five song encore, including an audience request for “Finger Back.” This show was an incredible return from the New York City band, and Dallas surely missed Vampire Weekend.