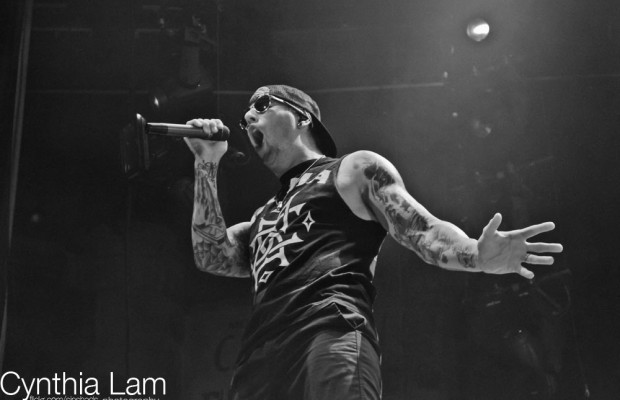 It’s safe to say that Rockstar Energy Drink UPROAR Festival is a night that I won’t ever forget. The lineup consisted of the local Jaegermeister band, Hail The Villain, New Medicine, White Cowbell Oklahoma, Hellyeah, Halestorm, Stone Sour, Avenged Sevenfold, and Disturbed. Starting in the sunny, moderate weathered outdoors, the concert made its way inside a packed venue where fans were cheering and singing along to every song.

This day started off with the Hail The Villain playing first. Their live performance was alright, with lots of movement and energy. Next, New Medicine took the stage starting with a catchy sound that seemed to stay in your head through most of the night. White Cowbell Oklahoma put on an entertaining show to say at the least. I, myself found them very entertaining and they were definitely doing something different than almost all the bands out there. Cloaked in cowboy hats and some of the members in jumpsuits, they performed with utmost energy giving the crowd a fantastic show.

Soon after the show inside the venue started, with Halestorm opening the main stage with fantastic applause and audience reaction. This quartet started the night off perfectly with a good live sound, and music that gets the crowd going. Stone Sour took the stage next, with a good live sound and performance. Although they may not be the most exciting band to watch live, there is no way one can deny that they sound ten times better live than on their albums. It was easy to tell that the audience loved Stone Sour and their performances by the reaction and antics that were pulled during their set.

The curtains came down, and the crowd started getting louder and louder, buzzing with talk about Avenged Sevenfold playing next. Up on stage many were setting up what I would consider one of the most aesthetically pleasing stages that I have seen. With Mike Portnoy’s drums set up on top of a platform, with gates and pillars spread out across the stage. As the curtains lifted up the crowd started erupting in screams and cheer for one of their beloved bands. The band soon came on stage and started off playing “Nightmare”. Starting off with a strong show, Avenged Sevenfold’s set included many explosions and pyrotechnics. In the middle of the set they changed the backdrop to a picture of The Rev, and asked everyone to hold up their lighters and cellphones. I have never seen so many lighters held up during a concert, and that just shook me. Being heavily influenced by Avenged Sevenfold when I was younger, that was just the most amazing thing for me to see. They put on one if the greatest live performances that I’ve ever seen, with songs ending in loud explosions. By the end of Avenged Sevenfold’s set the crowd was going wild, exploding into mosh pits, everyone in the area singing along, and just having the biggest smiles on their faces. Watching Avenged Sevenfold play live again is definitely one of the experiences in my life that I will never forget.

With a good lineup, a good organization setup for the tour, and a good, fun packed crowd, the Rockstar Energy Drink UPROAR Festival was one of the better tours in 2010.