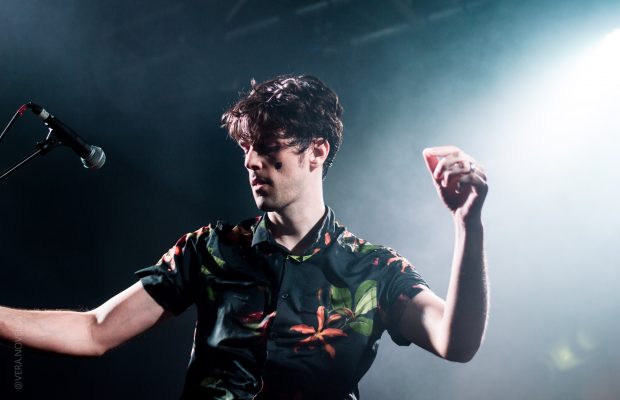 I Dont Know How But They Found Me with White Room

Words and Photos by Vera Valentín

About five hours before the show, the queue was already forming next to Camden Market. Loads of excited and committed fans were ready to see I Don’t Know How But They Found Me (iDK HOW) in their only UK show outside of Reading/Leeds Festival. When I arrived back at the venue an hour before the door opening, the queue went all the way round the block and the nerves were reflected on everyone’s faces, as the time to get in came closer. With an average age of early twenties and more than 10 different hair colours, some of them sang impatiently the lyrics of their most popular song ‘Choke’.

At 7:00 p.m., the doors finally opened and the venue slowly filled. With a crowded Electric Ballroom, the support act White Room started their set, which included songs from their debut album like ‘The Blue’ and ‘Cannibal Song’, as well as their latest single ‘Shoot’. The crowd patiently enjoyed the 5-member band from Brighton, but as soon as they finished, an ‘iDK’ chant started. No one could wait longer to listen to the duo formed by the ex-Panic! At the disco bassist and the ex-Falling in reverse drummer.

It was 9:00 p.m. and Dallon Weekes and Ryan Seaman were already on stage. After playing the intro song, saying hello to the crowd and apologizing because the bassist was actually ill (I wouldn’t have noticed if he hadn’t said so), the set began. The first song they played was ‘Do it all the time’ from their debut EP. It was followed by a cover of The Brobecks’ ‘Bike Ride’, during which I was surprised to hear most of the lyrics from the crowd. Next came ‘Bleed Magic’, also from their EP, and everyone sang the pre chorus ‘ooooohs’. The fourth song was ‘Social Climb’ and then we heard a cover of ‘Debra’ by Beck during which Dallon made the whole venue sing.

Already halfway through the show and in the middle of ‘A letter’, the duo challenged the crowd dividing them into two halves, each team lead by one of the members, to see which was the loudest to scream the bridge. They also performed ‘Iggy Pop’ and ‘Absinthe’, and as the latter started, the vocalist was surprised to hear Camden’s iconic venue singing back to him. Just before ‘Visitation of the Ghost’ (The Brobecks’ cover), Dallon welcomed the first-time listeners of their live shows and made sure everyone learned what the main rule of their fanbase was: no peer pressure. To everyone’s surprise, right after having all the audience singing that catchy ‘Oh my Lord, Lord, Lord, Lord’, the bassist decided to end the song while making his way through the crowd.

After ‘Lights go down’ (one of their unreleased songs), came probably one of the most expected moments of the night, the performance of ‘Choke’, which everyone sang at the top of their lungs. Second to last, the duo invited Jake (vocalist of White Room) to sing a ‘new’ version of ‘Opening Band’ changing the lyrics to ‘nobody likes the headlining band’. The set of the duo finished with ‘Boring’ (The Brobecks cover), leaving the venue with a bittersweet feeling and making everyone wish to see them live again soon.