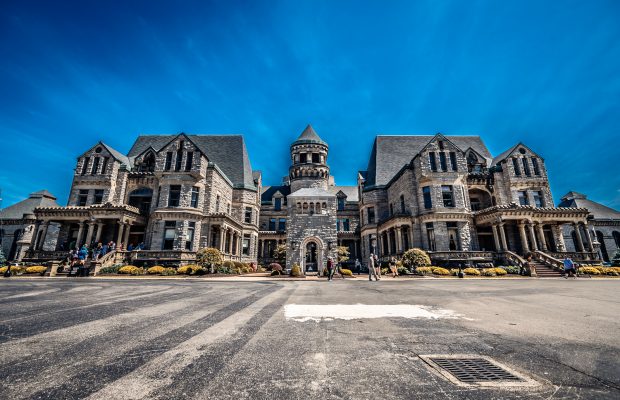 Last week Ohio was treated to an almost sold-out INKCARCERATION Music and Tattoo Festival at the historic Ohio State Reformatory in Mansfield.

Outside, in the 90-degree weather, a great line-up of bands entertained the crowd, while inside over 70 local and regional tattoo artists tattooed concert-goers. Attendees were also able to escape the heat by doing a self-guided tour of the reformatory, which is considered one of the most haunted buildings in the country and the setting of the 1994 movie The Shawshank Redemption (celebrating its 25th anniversary his year).

INKCARCERATION festival featured 30 bands on two stages and with all the other activities going on, I felt like there was always something to do. Unfortunately, the lines at the water station, as well as some food vendors were a little too long and I did miss some of the bands due to standing in line for too long.

The line-up this year was amazing:

Some of my personal highlights were Motionless in White, Red Sun Rising and Buckcherry. During Motionless in White there was a constant stream of crowd surfers. We saw Santa, as well as a girl in a scooter, who were carried to the front of the stage by their fellow concert-goers.

Local Ohio band Red Sun Rising captured the crowd’s attention with their catchy songs, as well as their amazing stage presence. Despite some issues with the sound during their first song, I overheard people saying how impressed they were with their set.

Overall, INKCARCERATION was a huge success and is always worth a trip. I can’t wait to see what next year brings.