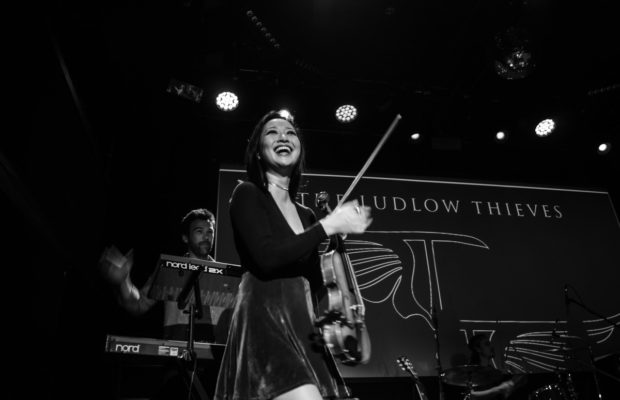 Photographs and words by Stefanie Dabaghian

If you’re ever feeling down and there’s a band called The Ludlow Thieves playing near you, go to their show. With some of the best lyrics that get stuck in your head and the vocals to back them they never disappoint in their live performances. I’ve been a fan of theirs for years, and I was excited to have the opportunity to photograph them during their soundcheck and live show.

On Friday the 13th they played to a full room at The Bowery Ballroom in the Lower East Side of New York City. Going to one of their shows is like going to church, your spirit gets lifted and you belt out their songs along with them. Members of The Ludlow Thieves include Danny Musengo and Laura Teicher on vocals, Walker Adams on drums, Isamu McGregor on keys, Dan Teicher on guitar, Amando Lo on violin, and on this night they had Cameron Mitchell on pedal steel.They played some crowd favorites such as “Almost”, “To Travel,and “All the Money” along with some new ones such as “Weight “ and “Burn August Down” off of their Iowa EP.

Opening for them on this Friday night was Lion in the Mane and Lover. Lion in the Mane is a local American rock band from Brooklyn, that formerly went under the name The Atlas. Lover, who also hails from Brooklyn, went on before The Ludlow Thieves and had the crowd going with their poetic lyrics and beats. These two bands are ones that I would definitely want to see live again.

Be sure to check out The Ludlow Thieves if they ever come near you. It’s a cannot miss show.