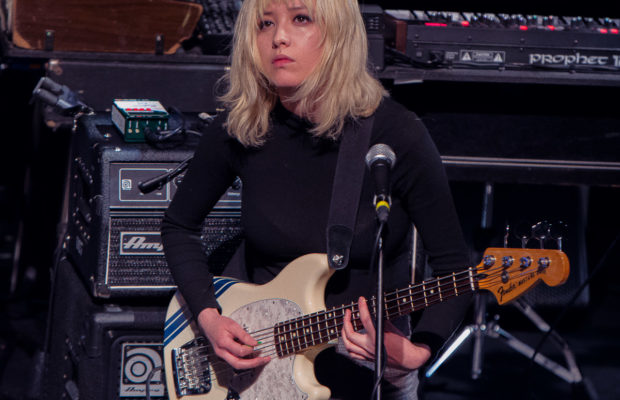 LA-based indie rock band Lo Moon performed recently in Louisville, Ky to a packed house.  Currently on tour with The War On Drugs, the band performed a short set to an enthusiastic and receptive crowd, getting them warmed up for the evening ahead.  Among the songs performed were the band’s hits This Is It and Loveless, which earned lots of cheers and applause from the crowd.  The band and crowd were both in high spirits as the music began, with this being Lo Moon’s first time performing in Louisville.  Band members Crisanta Baker, Matt Lowell and Sam Stewart, as well as their touring drummer Sterlin Laws, are all incredibly expressive performers.  They all seem to feel the music deeply as they perform, with their emotions evident on their faces.  It is clear that they have great chemistry and enjoy performing together, as they frequently interacted with each other on stage during each song.  Although they are fairly new to the scene, Lo Moon is making waves in the industry and gathering new fans with each show they perform, this evening being no exception. It will be exciting to see what 2018 holds for this band.  They put on a great show and will no doubt keep gaining more new fans!