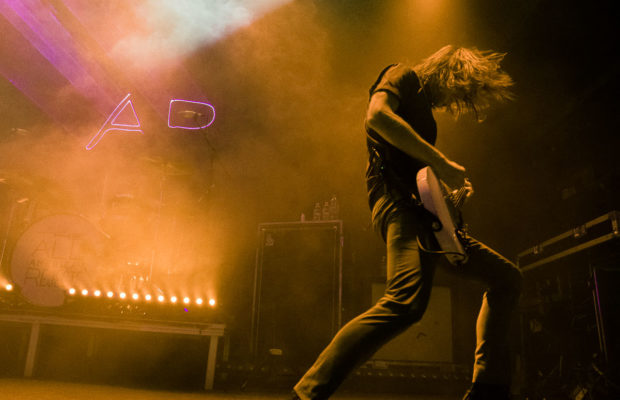 The All-American Rejects were on tour recently with Dashboard Confessional and performed a one off headlining show in Louisville, Ky.  They performed a passionate and energetic show to a sold-out crowd of fans, many of whom had lined up early to get a spot at the barricade.  Starting the set with their hit “Swing Swing”,  the band performed a varied set of songs and the crowd sang along to each of them.  There were several moments throughout the evening in which some of the female fans threw their bras on stage.  Singer Tyson Ritter caught one and joked about it not being his size.  About halfway through the set, Ritter, with a flashlight microphone, performed “Kids In The Street”, swinging his microphone around on a couple of occasions.  Channeling his alter-ego at the start of their set, Ritter often referred to the crowd as Honey and Baby.  About halfway through their set, though, he told the crowd that he was going to drop his stadium persona and just be himself for the evening!  The lighting for their set was amazing and constantly changing, with a projector set up by the soundboard that created lasers of light across the stage, as well as a sheet of light at one point that gave the crowd the feeling of being underwater.  For their last, pre-encore song, the band performed the beginning of the Pixies Song “Where Is My Mind”, which led into their hit “Move Along”.  After leaving the stage for a few seconds, the band came back on stage for two more songs. Ritter, standing on the drum kit and illuminated by the light of the projector, sang “Close Your Eyes”.  To end their set, they performed one of their most popular hits “Give You Hell”, causing the crowd to go wild.  The Maine opened the show and put on a wildly fun and high-energy set.  Singer John O’Callaghan is an incredibly fun and charismatic frontman and had a lot of fun interacting with the crowd, even bringing a fan up onstage towards the end of their set to sing a song with the band.  Dedric Clark, singer for the Minnesota band The Social Animals, performed a few solo songs before The Maine took the stage, getting the crowd warmed up for the evening.  It was a really great evening of fun and music!