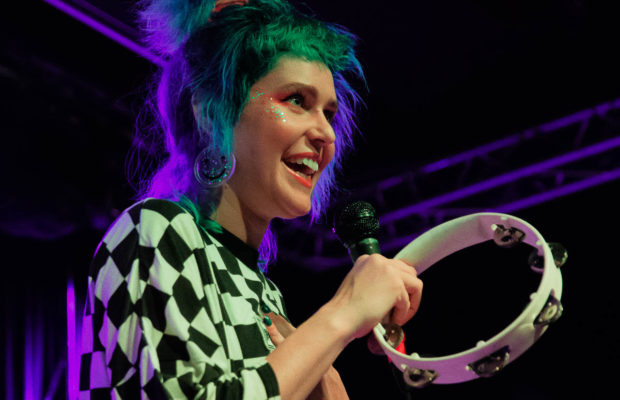 Tacocat with GYMSHORTS and Wombo

Seattle punk band Tacocat made a stop in Louisville, Ky recently, playing to a packed house of excited fans.  Although it was raining outside this evening, the weather didn’t dampen the spirits of the band or the crowd.  Singer Emily Nokes is a bubbly powerhouse on stage, dancing, laughing and doing plenty of leg kicks, all with her tambourine in hand.  With her black spandex shorts under a long black and white checked shirt, short green and pink hair pulled up into a high ponytail and glittery eye make up, she was a ray of sunshine on stage.  The band was incredibly interactive with the crowd, with Nokes and bassist Bree McKenna telling plenty of stories and getting plenty of laughs from the crowd between songs.  The band discussed seasonal affective disorder in Seattle with their song “Bridge To Hawaii” and  McKenna discussed her obsession with horses as a child, having loved the book series Thoroughbreds, and how happy she was to be in KY.  They then made the crowd laugh, after someone joked about centaurs, when asking what the difference was between a Minotaur and a Centaur.  Early in the set, drummer Leleah Maupin asked if anyone had a band aid, as she had a blister on her hand, but as a venue staff member brought one up she had decided to just wrap pink tape around her hand instead!  The band had a great deal of fun with each other on stage, with constant interaction between Nokes, McKenna, Maupin and guitarist Eric Randall.  Towards the end of the set, Nokes asked the crowd if any of the girls were on their periods.  When no one raised their hands, she laughed and said that the next song was just for her then, launching into the period positive anthem “Crimson Wave”.   The band invited GYMSHORTS on stage for the last song, as it was GYMSHORT’s last night of tour with Tacocat.  It was a party on stage!  It was a great night of music, with plenty of fun, energy, laughs and dancing!  The crowd was left buzzing after the show, as plenty of people headed towards the merch table to buy t-shirts and albums and with hopes of meeting the band.  Rhode Island punk band GYMSHORTS and Louisville band Wombo opened the show!