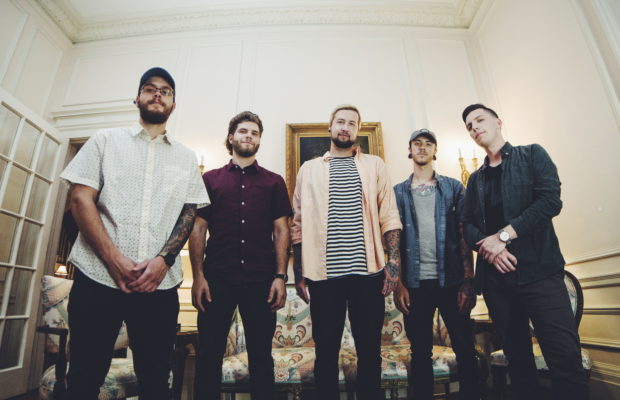 South Carolina Pop-Punk band Brigades have returned with a renewed sense of energy, passion and maturity, having just released their latest EP True Blue, their first new music since 2015.  The band consists of Darren Young (Vocals), Eric Morgan (Guitar), Dom Docar (Bass), Jacob Wright (Drums) and Ricky Canter (Guitar).  The EP was self-released and produced by legendary producer Gene “Machine” Freeman at Machine Shop Studio in NJ.  True Blue contains 6 upbeat songs and showcases the band’s progression as musicians.  It blends pop-punk melodies with post-hardcore rawness and catchy lyrics that definitely will have fans singing along.  After 2015’s release of the band’s album Indefinite and their 2016 Japan tour, the band was burned out and took a hiatus in order to do some soul-searching, hang out with family and friends and live their normal lives for a while.  The members decided to part ways and find new musicians to play with, with singer Darren Young deciding to reform Brigades with new members for a fresh start.  Feeling renewed, revitalized and happy about the new music and future of the band, Young is looking ahead with a sense of optimism for what lies ahead.  With a solid balance of focus between the band and their internal health and well-being, Brigades is poised for a bright future!  Staff writer Emily May spoke recently by email with vocalist Darren Young about the new EP, the band’s fresh start and what’s next for Brigades. You can stay up-to-date with the band and all album and upcoming tour news on their website, Facebook, Instagram, and Twitter.  You can stream their music on Spotify.  You can check out their videos on YouTube.  You can purchase their music on iTunes and on their website (along with merch). You can stream and purchase the new album on Bandcamp.  Check out the video for the song Turmoil from the new EP below.

You guys just released your latest EP True Blue on July 27th to a positive response! I read that the EP was self-released in an effort to start over and reconnect with your fan base and new listeners. Having done studio releases prior to this, how did it feel to self-demo this EP? Do you feel like it was therapeutic, in a sense, with less pressure or time constraints on the process?

It actually felt pretty normal to self-demo due to that being my usual process. I’ve always done things that way when starting on a record. However, yes, it was very therapeutic and pressure-free this round because I wasn’t on a time frame. I took things slow and refused to rush. I wanted to let the lyrics, melodies, and riffs flow out naturally (in a way that worked, of course).

The band recorded the demo with legendary producer Gene “Machine” Freeman at Machine Shop Studios in Asbury Park, NJ. What was it like working with him? What kind of perspective did he lend to the recording process?

Working with Machine was an incredible experience for all of us. He’s been one of my favorite producers since my high school years. It was great finally getting to work with him. I’ll never forget that first phone call I got from him. We just clicked immediately. Great producer, great person. He lended a lot of encouragement and helped us to build up the confidence to put full compassion into these songs. I can’t thank him and Julian (Machine’s engineer) enough for giving us the opportunity to create what I consider the best & most fun record that Brigades has put out to date.

What prompted the decision to release a limited edition run of the EP on blue cassette tapes? What has the fan response been to them? It seems like cassette tapes are making a comeback in recent years!

We decided to put out cassettes mainly because it was the cheapest route for us at the time. We self-funded everything straight from our pockets, so it seemed the most feasible at that point. Also, cassettes are such a cool collectors item when done in limited colors. Eric put a lot of time into making those look neat. The response from them has been fairly excellent! Brigades will keep pressing them.

Brigades released Our Lives Unfold, an EP of acoustic songs, in 2015. Are there any plans for more acoustic EPs going forward?

We don’t have any plans as of right now for an acoustic release, but I’m sure once True Blue picks up and gets some mileage, we’ll do something interesting in that realm. I always enjoy toning down the songs and reinventing them with a softer sound. The skeletons of pretty much every Brigades song usually starts out on my old Fender acoustic.

It sounds like the new EP came about spontaneously, in a sense, in that you had heard a demo that Eric and Dom had written for a new project they were trying to start and really like the songs. You met Eric and the two of you decided to write a new Brigades album. With you and Eric having such different creative styles, as Eric had written for metal bands in the past, what was the writing process like for the EP? Did you two write all of the songs on the EP or was it more a of a collaborative effort amongst all of the members?

Eh, that’s kind of how it happened. Dom was currently touring with the band. We had just returned from our Japan run and I got severely sick and we had to cancel a U.S./Canada tour w/ In Her Own Words & Bearings. So after constantly being sick, member changes, and having to cancel upcoming opportunities…it’s safe to say I was finally ready to throw in the towel indefinitely (no pun intended). Dom called me weeks later to tell me about him writing/recording this melodic hardcore stuff with Eric and felt that we should give him a shot at helping build the band back up. I had been a recluse for almost a month a half, and I loved the songs, so I rolled with it. We met up and hit it off immediately. The writing process began from springing off of ideas, riffs, and melodies I had been working on by myself during the recovery stage. Eric, Dom, and myself just got together twice a week and had a blast basically starting Brigades again from step one. Completely fresh with no remorse or concern of the future. Then lyrics came to me easier than they ever have before. I usually tear myself to shreds writing lyrics, but this time it felt so revitalizing.

I read an interview in which you stated that Brigades doesn’t want to be put in any kind of category, that you want to be a timeless band that defies any one specific genre. Is that still the vision for the band?

I don’t want that to get thrown out of context. We’ve just done a lot of different tours and I’d like to keep branching out and doing things out of our element. I don’t wanna be stapled down to one genre. There’s no room for growth just sticking to the “Warped” scene. I’ve noticed a lot of new people that don’t normally go to punk/hardcore shows (or listen to those styles) have jumped on board with these new songs, and I absolutely admire that. I want more new and unfamiliar faces at Brigades shows, as well as popping up on our feed. It’s great! I hope we can make a timeless record that maybe helps the uninformed recognize other bands similar to us. That’s how I got into so many bands growing up. It was the liner notes from some of my favorite bands.

A lot of bands feel the pressure to push themselves to the point of burn out, which is what happened to Brigades after the release of Indefinite and led to the band’s brief hiatus. Was it challenging at all for you to let go of that mentality and embrace a more realistic balance between the band and internal health? What kind of perspective did you gain in your time off and what made you and your previous band mates decide to find new people to regroup and make music with?

It was very challenging. Especially how broke I had become once again. It was a struggle to keep sight of the light at the end of the tunnel. Things got very blurry and extremely dark. However, in my time off I took time away from everything. Bad relationships, drugs, and bar hopping. I spent a lot of time alone. Then I started surrounding myself with only family and close friends. People who genuinely cared about me. They showed me how to believe & love again. This resurgence was done with an entirely new team. If I was going to start over with a band I started from the ground up as a stupid kid, I wanted a mint start. My perspective on all of it was/is/always will be “Sometimes things happen for a reason”. I was miserable then with so many aspects. Now I’m happier than I’ve ever been, living the best life and playing my favorite songs I’ve been apart of with the greatest people. The past is a bit unfortunate, but I’m glad I got to experience it and rise from the ashes with such amazing family & friends right beside me.

You have described True Blue as having a “ready to move forward and not look back” vibe. Has it been difficult to not dwell on the past or has it been easy, with the reincarnation of the band and fresh outlook on things, to look towards the future?

I’d be lying if I said it was easy not to look back and dwell. It took a lot of soul searching and solitaire to move past. Time heals everything though. Hard times. We all go through them. The future is bright. I’m more excited than ever for what’s ahead. I feel restored.

Who are you guys listening to right now? Are there any bands you feel that people should know about?

This year I’ve been listening to a lot of Blackbear, Juice Wrld, Yung Pinch, Coin, and those new From First To Last tracks that have been dropping. As far as the band goes as a whole, we all mix it up and listen to everything. It varies from old to new. Anything that inspires us or has a sick hook or riff.

What’s next for the band? What are your goals going forward?

Next on the agenda is just pushing True Blue and putting some high mileage on it. We’re gonna tour on it like it’s an LP because we love it that much. We’ll be putting out two more videos soon. No care of how the industry thinks we should do it. We’re just doing things our own way and having fun breathing life into our art. Hopefully we can connect with new fans and reconnect with old fans. After that, we’ll start working on demos for the next one.