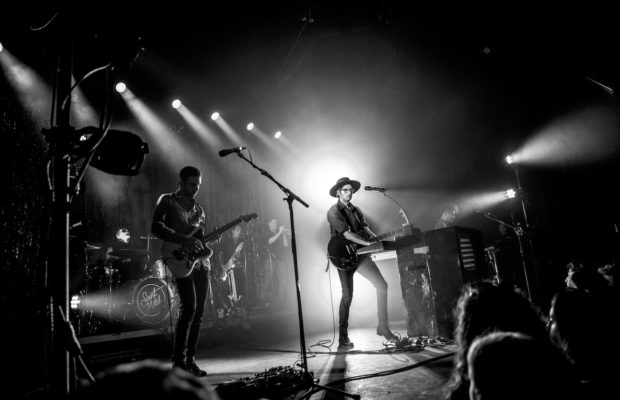 Indie pop band SAINT MOTEL played Union Transfer in Northwest Philly saturday night as support for their sophomore album saintmotelevision, which dropped October 21st on Elektra records. SAINT MOTEL, who are best known for their singles “Move” and “My Type,” brought and radiated a strong energy from the stage that kept the crowd dancing and singing all night long. Openers included rock band The Weathers, who started off the night with their killer guitar riffs and high energy dancing. Following The Weathers was Hippo Campus, notably known for their song “Suicide Saturday.” Both of the openers had high energy and prepped the crowd for the dance party that was about to come.

SAINT MOTEL’s entrance to the stage included a very cinematic intro – fitting for their theme of saintmotelevision, SMTV for short. The lights dim, and before I knew it, the crowd erupted into screams as the four piece alt group came running onto the stage. They opened up the night with “Local Long Distance Relationship (LA2NY),” from saintmotelevision. With flashing lights and all, SAINT MOTEL’s stage presence radiated positive vibes throughout the nearly sold out venue. Closing out the set was “My Type,” which got the crowd even more hype than they were. The group put on a hell of a show, and I suggest catching a date if the tour comes through your city.

Review and Photographs by Lexi Shannon