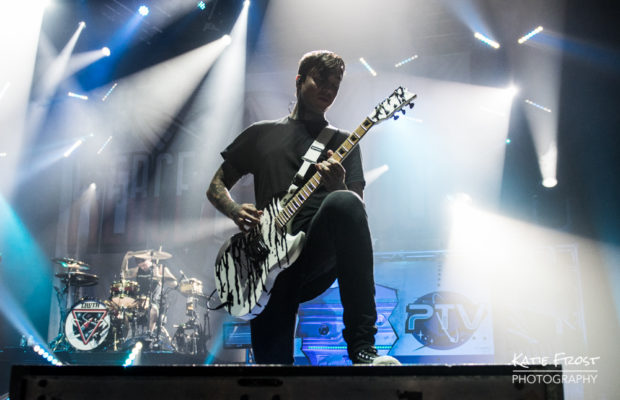 A queue of teenage girls snaked around Brixton Academy on a chilly Sunday night in Brixton, eager to see American pop-punk/rock band Pierce The Veil play a sold out show at the iconic London venue. Judging by the number of discarded duvets in the street I would say some of them had been queuing outside all day to ensure their place in at the barrier!

First on stage were British “horror-punk” band Creeper from Southampton who seemed to go down well with the crowd. Vocalist Will Gould used every inch of the stage and really got the crowd pumped-up for the main other bands.

Next up were American post-hardcore band Letlive from Los Angeles. They put on an incredibly energetic set, with lead vocalist Jason Aalon Butler barely staying still for long enough for us photographers to get a half-decent shot of him! One of the first things he did after their set began was jump over the security guards’ heads and into the photopit to get closer to the crowd at the barrier, and that wasn’t where the crowd-interation stopped. Later on in the set he tore up a piece of carpet from the stage and launched it into the crowd, who surfed it towards the back of the venue. Butler also took a couple of trips into the crowd himself, with the band’s technician attentively ensuring that the mic cable didn’t strangle any of the young fans.  Although their music was much heavier than that of the band everyone had come to see, Letlive got a rapturous applause and I saw many kids clutching Letlive tshirts after their set.

Pierce The Veil started their set with an animated short-film projected onto a large screen/curtain in front of the stage.  As the animation finished and the curtain fell to the ground the sound of teenage screams was deafening. The band wasted no time and launched straight into ‘Dive In’, taken from their recently released fourth album ‘Misadventures’. The stage set had an outer-space theme; with rocket parts decorating the stage, and even the lighting rig adding to the out-of-this-world atmosphere. There were punk-jumps, confetti canons, plumes of CO2…the San Diego pop-punk band certainly know how to put on a crowd-pleasing show! They are an incredibly charismatic band; particularly front-man Vic Fuentes and bass guitarist Jaime Preciado, who was constantly bounding around the stage and grinning at the crowd. The band, who celebrate their tenth anniversary this year,  were clearly having an equally good time as the fans who had come to see them.