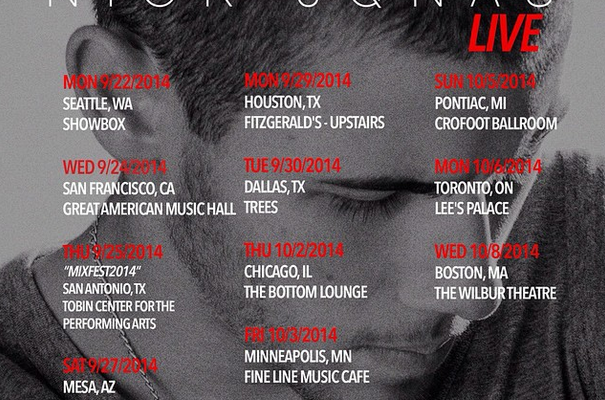 The excitement was evident as the line of mostly girls, ranging from 16 – 24 in age, circled around the block of Seattle’s busy Pike Street. Some brought signs, others chatted and speculated about what they might hear, but most just waited with anticipation for their eyes to land on the heartthrob that used to cover their bedroom walls.

The last time Nick Jonas stepped foot in Washington, he was standing next to his two brothers as the worldwide sensation continued on their 2009 World Tour. It can be said with confidence that, well, times have definitely changed.

After the return of the Jonas Brothers didn’t go as smoothly as planned last year, Nick Jonas is finally back with his latest music venture and so far, his new image is anything but Disney friendly. Ditching the floppy signature curls and slap happy pop jams for well crafted and mature R&B influenced songs, it is clear that he is ready to be taken as a serious solo musician.

To be frank, Nick’s new music has far more musical merit than anything the Jonas Brothers ever produced.

Kicking off the short tour stint in Seattle, Nick Jonas and his band of highly skilled musicians pleased the crowd with a setlist of primarily new music that will be featured on his upcoming self titled album, out November 11th.

Opening up with his first single “Chains”, the volume of the crowd proved that many Jonas Brothers’ fans have stayed faithful over the years and Nick has also managed to pick up some new listeners along the way. Performing to an audience of well over a few hundred people, fans were curious and excited to hear what new music was in store for the new solo artist.

One particular song that stuck on in the set was called “Warning”. The track has Nick playing an acoustic guitar and holds a catchy structure of well written and thought out lyrics that ran through minds for the rest of the night. As an album that appears to be primarily packed with upbeat tempo songs, it was refreshing to see Nick strumming a guitar, showing that he is a true musician who works hard to craft his own original songs.

You see, that is something that gets lost in the realm of music. Many spectators see Disney affiliated stars and immediately associate them with other musical talent of the same background that don’t write their own songs or play their own instruments. Many don’t know that Nick has mastered several instruments, writes his own songs and is a heavy influence in the music that he puts out into the world. This is all so evident during this live performance.

In the mix of songs from his upcoming album, Nick played some crowd favorites including “Vesper’s Goodbye” which was a track released through Nick Jonas and the Administration, a 2009 side project that was good enough to get Elvis Costello dancing around in his little shoes. The performance, one that was sang loudly by the crowd, was a good reminder that while Nick is moving forward with his career, he hasn’t forgotten about where he has been in the past.

Other moments of the night included covers of songs by Sam Smith, Frank Ocean and Jhene Aiko – all artists who most likely influenced Nick over this past year or two.

“Wilderness” is a track that easily showcases Nick’s upcoming album – it’s well written, it’s catchy enough to get you moving and just like his past two singles, it holds a sense of danger and sexual charge.

However, upon speaking to some of the show-goers that night, many, if not all, were highly disappointed in the length of the set. Barely breezing by the hour mark, many were hoping for a little bit more to the set that was over right around 9:30.

With only an album worth of songs to perform, along with some old favorites and a couple of crowd pleasing covers, it can easily be seen how there just wasn’t enough material to create a show length to please everyone.

As a Jonas Brothers fan who rocked the shirts, stood in line for concert tickets and saw them multiple times throughout the band of brothers’ career, it has to be noted that Nick Jonas’ Seattle show was one of the first times where his passion for the music he was performing was present on his face. He was so engulfed in the words spilling out of his mouth and the music he was unveiling to everyone in attendance that night, it’s hard to not root the guy.

The songs he showcased on the Seattle stage were gratifying enough – Nick Jonas is back with a point to prove and is ready to start this brand new chapter in his music career. With enough radio ready jams to take over the airwaves, Nick Jonas is just getting started.