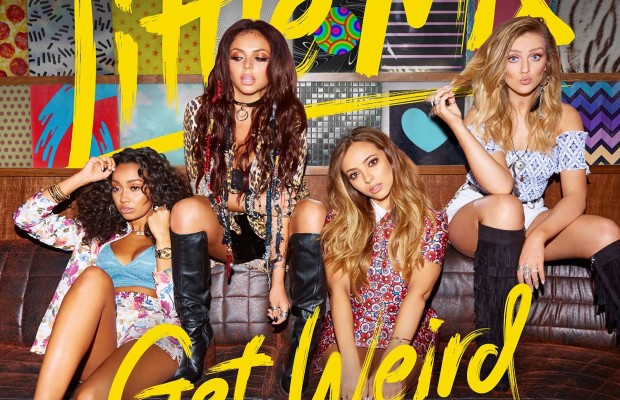 There is a lot riding on this upcoming album from the UK girlband Little Mix. After their sophomore album, Salute, did well in the United Kingdom, but failed to draw in American audiences and those alike, it is evident in the reinvented sound displayed on Get Weird that the Little Mix girls know they are at a make or break point in their career.

Turning away from the heavier pop sound that was showcased on Salute, this third album from the 2011 X Factor winners has been injected with a colorful dose of contemporary beats and 80s pop influence.

Opening up Get Weird is “Black Magic”, Little Mix’s most successful single to date. Spreading like wildfire on the radio circuit since it’s release back in May, this is also the track that encompasses the overall sound of Get Weird. The lead rhythm guitar gives “Black Magic” that 80s pop sound while the ladies’ layered vocals and powerful solos helped the single gain traction in not only the states, but in other parts around the globe.

After listening to the record, however, it has to be said that “Love Me Like You” was not a good single choice for Little Mix. Released to the public after the success of “Black Magic”, “Love Me Like You” fits in more as a filler than anything else on Get Weird. While the vocals are strong, the cheesy composition and high school prom gimmick that was seen in their music video was a step down from “Black Magic”. Get Weird offers a lot of upbeat and catchy feminist anthems that cause “Love Me Like You” to fade to the background as a forgettable track.

“Hair” is one of the strongest tracks on Get Weird. As a song that should have been the follow up single to “Black Magic”, it has all of the makings for the perfect pop radio hit. With strong lyrical content that preaches letting go of those who aren’t positively influencing your life, the ladies’ vocals are incredibly powerful causing a perfect blend of vocals and beats to be formed. It has a chorus that will get stuck in the head of anyone that listens to it while the tune itself encompasses the energy shown throughout Get Weird.

The track that inspired the album’s name, “Weird People” is a song I remain neutral about. While it is not a highlight of the album by any means, the song’s meaning will definitely empower their young demographic to be who they want to be, weird or not. Having great similarity to the tune from the 1985 film “Weird Science”, the potential wow factor that could have been offered gets lost in the cliche theme song sound. As a song that will probably make for a good live performance, it isn’t the strongest Little Mix has released.

Get Weird’s wow factor comes from “Grown”. Debuting the song at this year’s Apple Music Festival back in September, this is a track that contributes to Little Mix’s brand new sound. While it only lasts about two and a half minutes, the girl power attitude and Little Mix sass mixed in with the unexpected medley of beats in the chorus give Get Weird the edge that is needed to break up the very sweet pop sounds of the other tracks. As a favorite among fans already, “Grown” will most likely be a single off of Get Weird in the future so don’t be surprised if you turn on the radio one day and hear it blasting through the speakers.

The wild card from this batch of songs is definitely “Lightning”. A track that seems completely out of place in comparison to the others, the odd arrangement “Lightning” offers to Get Weird shows variability for Little Mix in both vocals and style. While the verses and hooks have a very strong 90s R&B influence that show the vocal ranges of Leigh-Anne Pinnock, Jesy Nelson, Jade Thirlwall and Perrie Edwards, it is the unexpected beat in the chorus that threw me off at first. Stylistically, this is a track that might have been better suited on Salute due to it’s darker influence both lyrical and in it’s composition. Nevertheless, it can’t be denied after listening that the Little Mix girls are incredibly strong as solo vocalists, but are an unstoppable force when harmonizing together.

Hitting the scene in less than a week, Get Weird is looking to be just the thing Little Mix needs to mark their spot in the world of pop. Reviving the sounds of the 80s with their own personal twist, it is evident that Little Mix are more confident than ever and aren’t going to allow themselves to disappear into oblivion like so many other X Factor contestants.