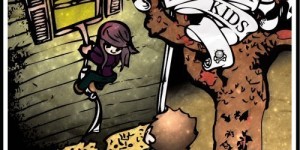 Forever The Sickest Kids breaks from their previously planned “The Weekend” album strain and gives us a self-titled album—eleven new tracks from the Texas-based (now) quintet.

“Keep On Bringing Me Down” was released last year, and is a song that most FTSK fans are familiar with as they’ve been playing it for several months at their summer shows. “Forever The Sickest Kids” opens with this song, a high-energy anthem intended to draw the listener in, and it does just that. It’s followed by “I Guess You Can Say Things Are Getting Pretty Serious”, which presents a new sound from FTSK that fans of the band may not have heard before. It’s different, but this reviewer definitely enjoyed it. It’s cool to hear a band experimenting with different sounds and ways of presenting their music.

The next cluster of songs on the album flow seamlessly from one to another—a mixture of upbeat and somewhat melancholy. Forever The Sickest Kids always manages to write songs that seem like they will translate well to live shows, and all the songs on this album are no exception. Whether they’re slower songs like “Forever Girl” or songs with a much higher energy like “Life of the Party” or “Good Life”, all of the songs on the album work together to make a relatively solid album. It closes out with “What Happened To Emotion”, which seems like a perfect way to close the album.

While their self-titled album wasn’t quite as good as UAM, it’s definitely worth picking up and giving a listen to. They are indeed two very different albums, but all the songs (on the self-titled) are distinctly Forever The Sickest Kids, while experimenting with new sounds and not straying too far away from what they’ve become known as. This album was released on March 1st.