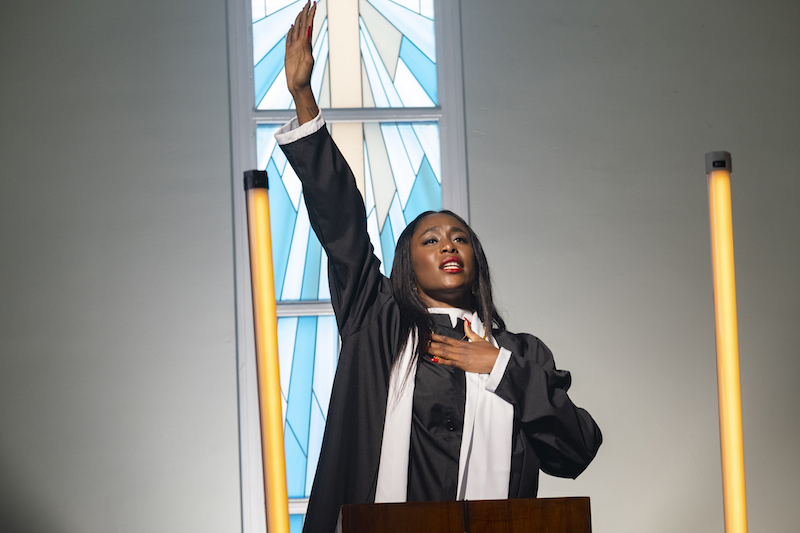 “One of those tracks that latches itself onto your consciousness the second it hits your ear canal. With a totally unique sound that glues the best parts of punk rock, hip-hop, dub, and industrial into one intoxicating brew, Jones catches you on the first note.” — AFROPUNK

“”Sacrilege” is a blatant denouncement of religion, specifically Catholicism and what it represents for Black people whose history was intercepted by slavery,” explains Jones to AFROPUNK.  “For my people, religion/Christianity was used as a tool of oppression and control while the heritage of our spiritual identity was erased.  It is important for me to begin the discussion about the damages that religion has done to us as a people through the programming of our ancestors during slavery and beyond; and the strides we need to take to heal, unlearn, relearn, correct and salvage what is left of our true identity and teach that to our kids.  So we’ll begin by turning our bibles to 1 Peter 2:18 King James Version.”

Featuring a frenetic and ruthless flow over a robust bassline joined by sawtoothed synths in the hook, the incendiary tone and lyrics of the track are perfectly matched by the smokey neon visuals of the video.  Director Alex Di Marco combines religious iconography with fragments of horror movie aesthetics and tops it all off with Racquel’s powerful hip-hop performance to bring her message of oppression to the forefront.  While the phrase “renaissance man/woman” gets tossed around freely these days, for Racquel Jones – a professional rapper and singer, a skilled painter, an accomplished model (former Miss Jamaica Universe contestant), and a poet, bestowing the term on her is not only authentic but well-earned.  For the past several years, Jones has been building her career through tireless performances as part of Thievery Corporation’s touring band, which has exposed her to tens of thousands of fans throughout Europe, South America and the US from coast to coast.  As the star of the first single and video from their 2017 release, The Temple of I & I, the track “Letter to the Editor” introduced her unique singing/rapping style to their legions of fans and brought her a bonafide audience of her own around the world.  Throughout those years, her individual multi-faceted mediums of art have influenced each other, synergizing to sculpt a sound and vision completely her own.  “To apply my visual art concepts to my musical creative process affords freedom and knowledge to an idea that is uniquely me,” says Jones.  “The approach was a straight-flow, stream-of-consciousness, like Van Gogh painting manically with Dali-like compositional structures in a Kanye West mind.  We’re going deep now into new sonic landscapes.” You can connect with Racquel Jones via the following links. Photo credit: Lacey Terrell.