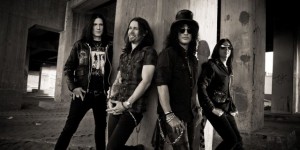 The legendary Grammy-winning rock guitarist Slash has released the first song from his upcoming sophomore studio album Apocalyptic Love called “You’re A Lie”. You can now listen to the song on his website. The album features Myles Kennedy and The Conspirators and is set to release on May 22nd.