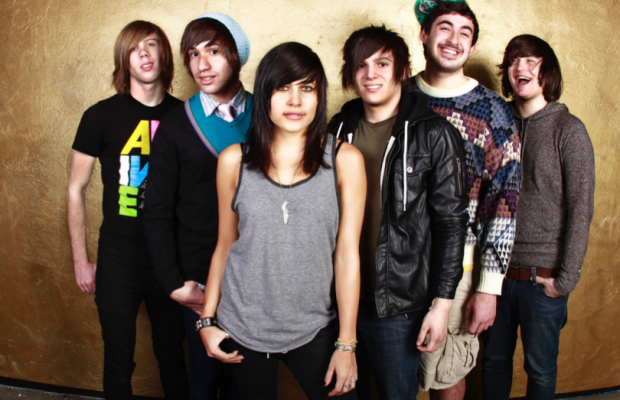 How did Love, Robot come to be?
Well, first we were a hardcore band when it was only Brando, Matt and Jon. They decided they wanted to change their sound and invited me to play guitar. then we got Taylor on bass, and Jon and I decided we wanted to focus on only singing and so we got Sean to take over both of our guitar parts compared into one.

What sets you apart from other bands?
Well firstly there’s six of us, which is bigger than most bands in the scene and secondly, the boy/girl singer thins is something else different we have going for us.

What has been the biggest challenge you’ve had to overcome?
Well, me personally dealing with the negative comments that come along with all the positive ones. I’ve come to realize that no matter how many people like your music, there’s always going to be that 5% of people who don’t and feel the need to vocalize it. It’s been a challenge for me to not take them to heart, and to transform their negative comments into positive energy to keep me driven to prove them all wrong.

What is your biggest accomplishment?
Well, we won the Warped Tour Battle of the Bands last year for Boston, MA! I’ve always dreamed of playing at Warped Tour and to know we’re at a level where it’s become possible, is a really fantastic thing.

Is there a message you’re trying to send through music?
I mean, I’d say to be positive. All of us as people are very optimistic people, and we try to portray that through our music. In L,R songs, the glass is almost always half full!

Do you plan to play music for a living? When did you know that you wanted to play music?
Yes, definitely. It all started when I saw the movie “Freaky Friday” and Lindsay Lohan was in a band and played guitar. I honestly think that’s when the switch flipped in my head, all I wanted to do was get a guitar and learn to be as cool as her in that movie.

Have you all musically grown since you started the band? How?
Oh absolutely, we’ve come a long way and I think only recently we’ve actually began to see our full potential, which we haven’t even reached yet. We’ve all grown up as people, and we’ve started to take into account things we never did before, like all the relationships between instruments in the band and what compliments them.

Is there anything that shocked you about the music industry?
No nothing “shocked” me, however sometimes it saddens me when there’s battle of the bands that are rigged and slimy people who try and scam you but we push through it all.

How would you describe your music to someone who’s never heard of Love, Robot before?
We’re a pop-punk band who’s songs are dipped in hot sauce!

What was ways people can help support Love, Robot?
Following us on Twitter (@lovecommarobot) and keeping up with all the updates, being at shows, and most importantly: talking to us individually. We are all people just like everyone else and we love to make friends with our fans.