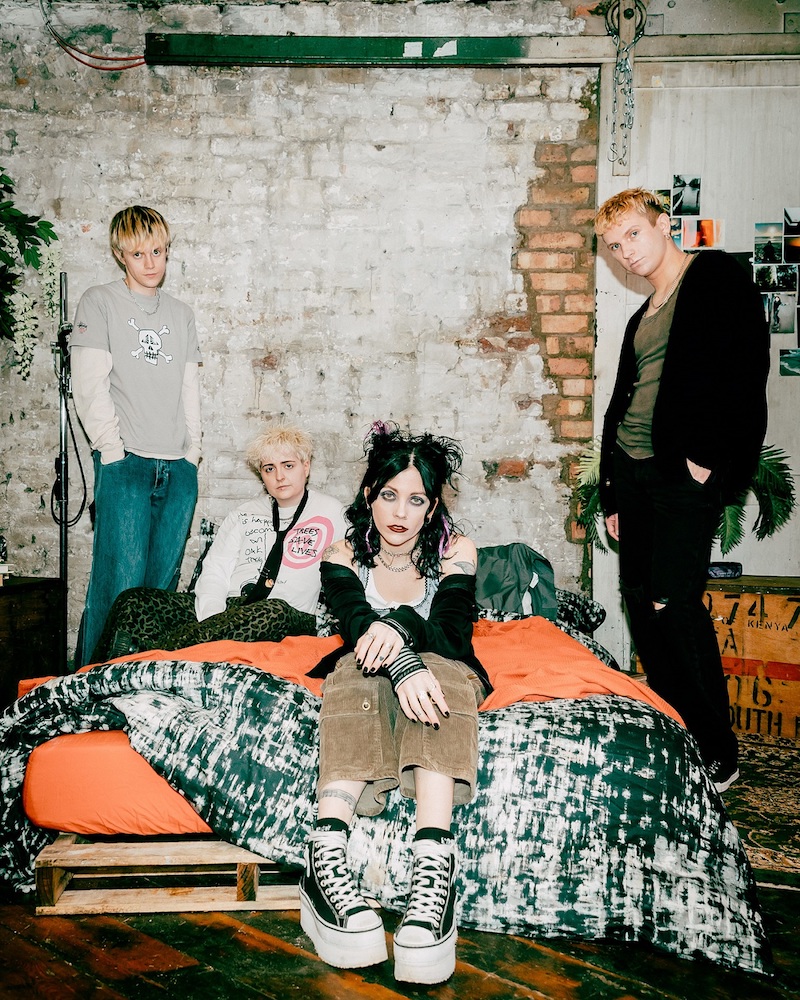 Pale Waves recently released Who Am I?, their high-anticipated sophomore album, via Dirty Hit, alongside the music video for latest single “Fall To Pieces.”  The video gives a raw inside look at front woman Heather Baron-Gracie’s early relationship insecurities and growing pains through a series of cinematic, confessional vignettes.  The album also features previously released singles “You Don’t Own Me,” “Easy,” “She’s My Religion,” and “Change.”  Flipping the Pale Waves world upside-down, Who Am I?’s singles are quickly adding to their over 175 million global streams and draw strength from vulnerability to usher in a new acoustic-guitar-laden alternative pop rock energy. Current single “Fall To Pieces” speaks to falling into toxic patterns in a relationship which can lead to a cycle of the same argument over and over, while “You Don’t Own Me” is an empowering, guitar-heavy release of frustration which lashes out against misogyny to defend the individuality of others. “Easy” is an uplifting, shimmering pop anthem about being in love with being in love and how transformative the experience can be, while “She’s My Religion,” which premiered worldwide on Zane Lowe’s New Music Daily on Apple Music 1, serves as an atypical love letter which sees Heather embracing her sexuality to represent a queer relationship without hiding behind the clichés of oversexualization or playful experimentation.  Retro guitar track “Change” is made up of stories of heartbreak from Heather’s friends and was first played as BBC Radio 1’s Hottest Record In The World.  The collection has already garnered praise from Wall Street Journal, Billboard, NPR, Buzzfeed, The FADER, AV Club, Vulture, Consequence of Sound, Stereogum, Alternative Press, NYLON, Earmilk, and many more.

Who Am I?  – the coming-of-age follow-up to the band’s 2018 debut album My Mind Makes Noises which amassed over 70 million streams worldwide – opens up a bold new chapter for Pale Waves. Confidently creating a safe space for people to be themselves, Heather’s songwriting holds the last few years of her life up to the light, reflecting on her own mental health and growing pains – depression, distraction, and feelings of darkness – but also her experience of falling in love and becoming more open about her sexuality, emerging with a newfound clarity and optimism.   The album acts as the Pale Waves manifesto, inspiring inclusivity, self-discovery, and the notion of being whoever the hell you want to be.  On the making of the album, Heather says “for me, music and art is for people not to feel so alone and isolated.  I want to be that person my fans look up to and find comfort in.”  Who Am I? was recorded primarily in Los Angeles alongside producer Rich Costey (Muse, Foo Fighters, Sigur Rós), before the Coronavirus lockdown forced the making of the album to go virtual, with Heather remaining in LA and the rest of the band returning home to record their parts in their bedrooms, sending them back to LA to be added into the record.

Pale Waves – comprised of front woman Heather Baron-Gracie (she/her); drummer Ciara Doran (they/them); guitarist Huge Silvani (he/him) and bassist Charlie Wood (he/him) – made an immediate splash when the debuted on the music scene a few year ago, hitting the Top 10 on UK Album Chart, winning the NME Under The Radar award, making the BBC Sound of 2018 shortlist, touring with fellow Dirty Hit label mates and mentors The 1975 as well as Muse and The Cure, and appearing on Late Night with Seth Meyers.  They have performed at Reading, Leeds, Lollapalooza, SXSW.  You can connect with Pale Waves via the following links.  Photo credit: Tom Pullen.