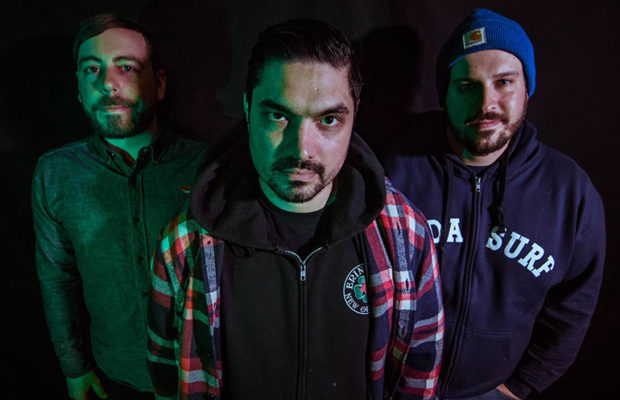 Brooklyn-based Punk band Pass Away released their debut full-length LP entitled The Hell I’ve Always Seen on May 25th.  Comprised of Mike Ireland and Kellen Robson of I Am The Avalanche and Eric Fairchild of Crime In Stereo, the trio decided to form Pass Away in the winter of 2014.  They proceeded to release two EP’s, 2015’s Hey Death and 2016’s Sink Your Hooks In, both of which were influenced by their love of ’90s West Coast punk and The Replacements.  With the release of their LP, Pass Away is said to have truly found their sound.  Our staff writer Emily May spoke recently via email with Eric and Mike, who hilariously discussed the new album, their inspirations and what’s next for the band. You can stay up-to-date with the band and all upcoming tour information on Facebook, Instagram, Twitter and Bandcamp.  You can stream their music on Spotify .  You can purchase their music and merch on their Bandcamp page.  Check out the song “Brooklyn Sky” from the new album below!

Mike and Kellen, you both are in I Am the Avalanche and Eric, you are in Crime in Stereo. How did the idea of starting Pass Away come about?

Eric: Pass Away is really the brain child of Kellen. He knew that I liked drinking and he also knew that Mike likes drinking and so he brought us together. Mike also just happened to be my neighbor on Melrose Street so that made meeting up very easy. I saw him on the street a bunch and thought he was cute and that I’d like to get to know him. We had a few practices and a few arguments with waiters and boom the best band in the world was started.

Mike: Avalanche was pretty stagnant at the time and I just wanted an excuse to make some noise with my buddies and drink beer. It ended up awesome and we rule.

You recently released your debut LP The Hell I’ve Always Seen. You released 2 previous EP’s, Hey Death in 2015 and Sink Your Hooks In in 2016 and have grown and developed your sound with each album. How do you feel that you have grown as songwriters over the past few years? How do you view the new album in relation to your previous albums?

Mike: We stopped snorting xanax at band practices and sort of got our shit together in terms of writing better songs. I have always been a genius.

Where was your new album recorded and what was the recording process like? Did the album come together quickly or did you write the songs over a long stretch of time?

Mike: Pretty fucked up. We spent well over a year on it. Some of the sessions were amazing and some were just so awful that we scrapped them. Eric and I would lay down drums and guitars and then Kellen would come after work and do bass in like 20 minutes. Vocals were my favorite part of the process because my voice rules. The studio is in a basement right in our neighborhood so we would take breaks and go drink at Old Stanley’s and eat tacos. We did the whole thing pretty drunk and it shows.

Aside from the 3 of you being in other bands, Mike, you own a bar in Bushwick called The Three Diamond Door. How do you manage your time between the bar and the band?

Eric: I’ll take this one thanks. Mike equally loves drinking and loves playing music. The business has really always taken a back seat to band practice. Mike really needs to let his genius shine…you can’t bottle it up. Band practice.

Your first two EPS were inspired by your love for ‘90s West Coast punk and The Replacements. Who are your favorite punk bands from that era? What would you say inspired the new album?

Who are you guys listening to right now? Who would you say are some of your current favorite bands?

Eric: Make War, Twin Strike and Living Room are the best bands out of Brooklyn right now (besides us of course). I prefer to crash their band practices rather than listen to the “record”. Nothing beats drunkenly showing up at their practice spaces and forcing them to crank out a few songs in front of you.

What are your thoughts on the music scene right now in New York? I’ve heard a lot of bands say that New York is an inspiring place to live as a musician. Do you guys find that to be true for you? What do you like to do when you have down time?

Mike: New York is insanely inspiring. It’s a dark fucking place to live. You see shit that you don’t see anywhere else in the world. You meet people that either become your best friends or people that you will never want to see ever again. Darkness inspires me. Love and happiness does not. The few love songs I’ve written really suck. Our whole band is pretty much our down time.

Eric: Well Mike is going to die pretty soon so we are trying to pack in as much as we can before that inevitability. Maybe one more record from us then it’s lights out for him.