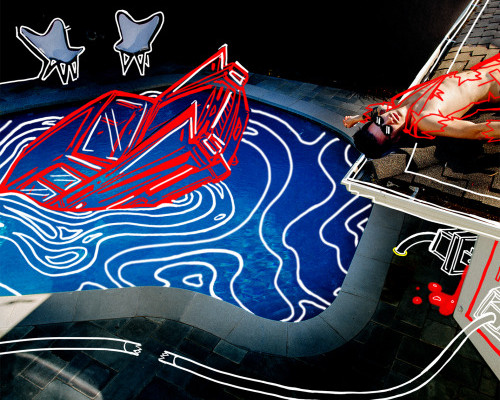 Panic! At The Disco’s new album, Death of a Bachelor, will be released January 15th. Read the official statement from Brendon Urie below and watch the new music video for “Emperor’s New Clothes” here.

When I was a little kid and I heard a song I liked on tv, I would jump up and run to the piano to try and figure it out by ear. When I was 10 or 11, I built myself a drum kit in the garage made out of empty laundry detergent buckets, old lawn chairs, paint cans, and old trash cans. Around that time, my parents got me my first guitar. A baby acoustic. I jumped between all of these instruments constantly to satisfy the ideas I heard in my head. At this young age, I realized that music would play a huge part in my life. I had no idea.

“Death Of A Bachelor” is in honor of those times I spent alone as a kid. Allowing music to consume me. Playing everything myself just to get the idea right and out of my head. It’s a beginning to a new era. And an homage to how it all began.

This album is me. Running to the piano. Building a drum kit. Strumming a guitar.

Brendon Urie
Panic! At The Disco

New album ‘Death Of A Bachelor’ out January 15th. Pre-order the album on Apple Music now, and get the new single “Victorious” as well as “Hallelujah” & “Emperor’s New Clothes” instantly. If you don’t see the pre-order up yet, it’ll be there by midnight local time. CD bundles available in the webstore.

Welcome to the end of eras – watch the video for “Emperor’s New Clothes” below and on YouTube (coming soon to Spotify).

New York, Los Angeles and London, you might want to pay close attention… we’re playing some fun intimate shows to celebrate the release in January. These tickets will go fast, so don’t miss out! Links will get posted up soon.