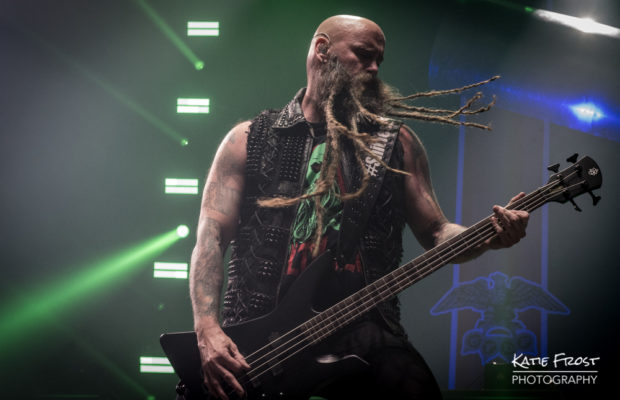 On Thursday night I headed to Wembley Arena for the final show of Five Finger Death Punch and In Flames’ mammoth 25-date co-headlining tour, alongside special guests Of Mice & Men.

This 25-date tour was the headliners’ biggest European arena tour to date and they certainly pulled out all the stops to make it as spectacular and memorable as possible. Whilst the show was not quite sold out, the 12,500-capacity venue was packed with rock fans, most of whom (like me) were enjoying their last gig of the year…and what a brilliant way to end 2017!

First to take to the Wembley Arena stage were Southern California-based metalcore quartet Of Mice & Men (OM&M). Although I had never seen the band live before I had heard great things about their music and their energetic live shows. Following the departure of vocalist Austin Carlile in December 2016 (due to his on-going battle with Marfan syndrome) bassist Aaron Pauley has taken over on vocals and the band are now a four-piece. This seemingly hadn’t stopped the band from putting on a monsterous live show, which was full-throttle from the start as they opened with “Unbreakable”. The band played a short but sweet six-track set featuring their latest single “Warzone” taken from their upcoming album Defy (due for release on 19 January). OM&M were a great choice for opening band and got the crowd thoroughly warmed up for the evening of entertainment to follow.

Next to hit the stage were In Flames from Gothenburg, Sweden. The band have been around for 27 years, and their sound has been ever-evolving; from melodic death metal back in the late 90s and early 2000s, to more of a modern American rock / metal sound in recent years.

From behind a thin curtain featuring the band’s logo, In Flames opened their set with “Drained” from their twelfth studio album Battles (released November 2016). Although their newer music features more uplifting melodies, largely clean vocals and increased use of synthesizers, the band’s signature harmonized guitar sounds an energetic riffs still remain. As well as tracks from Battles the band also featured some older, heavier tracks from of their back-catalogue in their set, including “Take This Life” (Come Clarity, 2006) and “Alias” (A Sense of Purpose, 2008). Since I last saw In Flames in June 2015 there have been a couple of changes to the line-up, which now features Joe Rickard on drums and Bryce Paul on bass. The two new additions seem to fit in well with the other three members Anders Fridén, Björn Gelotte and Niclas Engelin.

As In Flames ended their set somewhat appropriately with “The End” I was surprised they didn’t play any tracks from their most recent EP Down, Wicked & No Good (released 17 November 2017 and featuring covers of songs by Alice In Chains, Chris Isaak and Depeche Mode and Nine Inch Nails). Perhaps the band preferred not to include any covers in their set – they certainly have enough of their own material!

Last to take to the Wembley Arena stage were Five Finger Death Punch (5FPD). The fired-up crowd roared with excitement as the huge curtain featuring the band’s knuckle-duster logo fell to the floor and the band launched straight into “Lift Me Up”, against a backdrop of a huge skull and crossbones (well, crossed baseball bats).

The band released a greatest hits album titled A Decade of Destruction on 1 December 2017 featuring 13 of the their greatest hits plus 2 new tracks; “Trouble” (the band’s first new single in two years) and “Gone Away” (a rock ballad cover of the 1997 song by The Offspring). The band have a hefty back-catalogue, having released six studio albums to date (with their seventh rumored to come out in Spring 2018) so there was no shortage of tracks for them to pick to form their set-list. As well as playing some of their pounding classics such as “The Bleeding”, they stripped it down to play three acoustic tracks including “I Apologise”, before ramping the tempo back up for the rest of their set.

Bassist Chris (with a dreadlocked beard reminiscent of a character from Pirates of the Caribbean) flicked picks into the crowd, Jason melted their faces with his guitar solos and the whole band were great fun to watch, especially with Ivan back on the mic, complete with notorious red hand-print adorning his face. There were lasers, there were smoke machines and there were flames. It was a non-stop, high-energy show and the atmosphere was fantastic!

As the band’s set drew to a close, the arena was illuminated by the lights from thousands of phones as 5FDP played their last song “The Bleeding” with the torch-light twinkling crowd swaying from side to side. After finishing their set the band’s version of “House Of The Rising Sun” was played out over the speakers as the band bowed to their adoring fans and threw picks and drumsticks into the crowd.  What a fantastic end to an incredible show, and a wonderful year of music. Bring on 2018!

Wash It All Away

Wrong Side of Heaven (acoustic)

Under and Over It