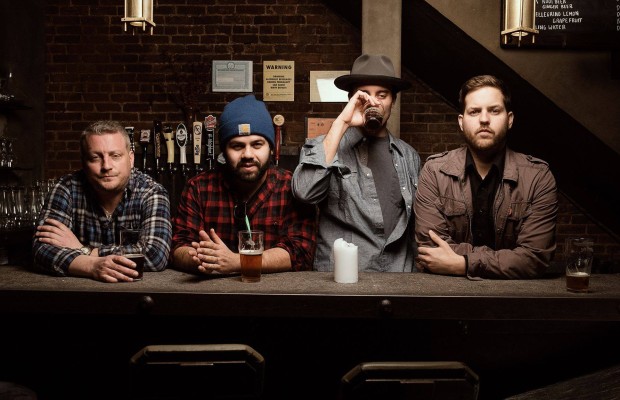 Skunkmello is a rock and blues band from New York City. Jono Ori, their drummer, talks about the band’s most memorable show.

We’d just met back up in Nashville for another few days of The Outlaw Roadshow, a series of live music events curated by our friends Ryan Spaulding and Adam Duritz.

To get to the Music City, Ed and I drove 15 hours from NYC, Matt and Jason flew, and our sometimes organist Mark arrived a full day later from Chicago. Relieved that everyone made it safely, we took an afternoon swim in our Air BnB’s pool, enjoyed a few cocktails, and took a cab to see the afternoon’s first bands. After hugging old friends, watching a few bands, drinking too much keg beer and giving a hilariously sloppy radio interview, we all started feeling a bit famished and it was suggested that we celebrate our arrival with some local cuisine: Nashville Hot Chicken.

When you first order Hot Chicken, you’re warned that you should pace yourself, but they don’t tell you why. The first bite tastes like normal fried chicken with a hint of spice in the breading and by the time you swallow, you’re convinced that it’s not as bad as you were told. It’s not until the second bite when the heat kicks in and all hell breaks loose.

As tears ran down our faces, our waitress informed us that the bird sits in special brine overnight and becomes completely saturated with the spice that you only taste a hint of on the skin. Hot Chicken, we learned, is very very hot and the heat doesn’t go away. One of us soon asked if there was any available antidote to suppress the heat and that, my friends, was when we became familiar with our second adversary of the evening, The Bushwhacker.

Our waitress might have told us that the Bushwhacker is a frothy, frozen drink that tastes like a milkshake but contains enough rum and Kahlua to take down a horse, but I don’t recall. By the time the drinks arrived we had already downed our large-sized beers, two pitchers of water, and a large order of fries. None of them did any good. And so, our waitress only made it about halfway back to the bar after dropping off that first round of Bushwhackers when we called for a second.

This pattern continued for some time until the burning in our mouths subsided and a warmer, altogether jollier sensation took its place. And after paying our tab and greeting and drinking with a large bachelorette party that had filed into a table behind ours, we hit the street. What followed was a typical night of Skunkmello-brand debauchery, including a trip to Nashville’s famous double-wide dive-bar Santa’s for dancing and karaoke, a lost wallet, a missing shoe, and a Bushwhacker-induced face plant that gave us the opportunity to compare a Tennessee emergency room with those in our native New York.

Aside from nagging hangovers, some nasty bruises and stomach aches, we lived to fight another day and were in relatively good spirits when we played one of our best shows to date opening for the Counting Crows the following night.

I’d like to think we all learned a valuable lesson, but don’t count on us remembering what it was.

One thought on “Most Memorable Show: Skunkmello”