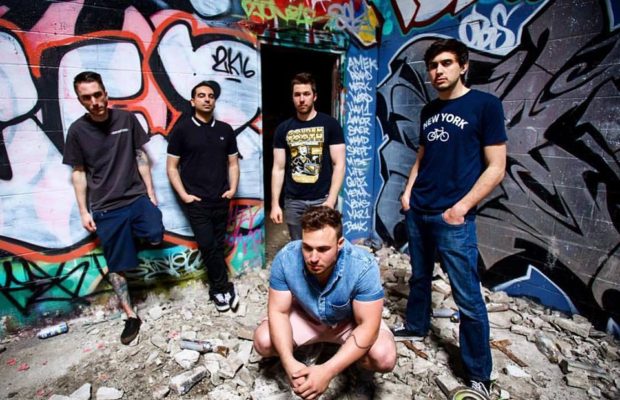 Last year, they were the winners of the Ernie Ball Battle of the Bands in their home state of Connecticut and now, pop punk band From States Away just released their new EP, Hypervigilant, a collection of well written, classic pop punks songs that will give some artists a run for their money. We recently caught up with the band and each member opened up about what sparked their passion for music and helped them decide to become musicians.

Sal Salemme (drums): Growing up, my father always had a drum set in the house and always tried to get me to play, but I was a stubborn kid (although not much has changed) and it took me until middle school before I actually gave drums a try. I started in the older more simple stuff like AC/DC and eventually graduated up to Keith Moon and The Who and other bands like that. When I went to college, I heard “The Beach” by All Time Low in my freshman year dorm room and that was it, I was hooked on pop punk. I couldn’t get enough and I wanted to play and write pop punk music more than I wanted to eat. I started grabbing any kid I could find that would come play music in my parent’s basement 20 minutes from campus and from there, my first band was born. Since then, it’s just grown into a love for writing. There are these rare moments when you’re writing music with people that everything clicks and everyone just looks around and smiles while you’re playing and it’s an unspoken agreement that THIS is exactly what it’s supposed to sound like. It’s my favorite feeling in the entire world.

Bennett Pisaniello (guitar): I had a bit of an interesting start to playing music, which believe it or not, started in my senior year of high school with the game Guitar Hero. I had never been much of a musician other than playing percussion in my middle/high school concert band (with Brendan!). I had gotten pretty good at the game, and one day realized that instead of playing a game, I could go and buy a cheap guitar and practice playing one for real. That’s exactly what I did, and it ended up being the single greatest decision I’ve made in my entire life. The thing that really sold me on playing was hearing my favorite Blink-182 songs come out of my little 10w practice amp. I couldn’t believe I was actually playing these songs that I had adored for years. I printed out the tabs and practiced every single day. About a year later, I joined my first band with Sal and the rest is history. Nothing else in my entire life has made more sense to me than music. It’s given me some truly unforgettable moments in my years of playing, and has helped me truly find myself in this world. That’s why I will forever be grateful to Guitar Hero.

Brendan Beebe (bass): Music has always been in my life. Since I was a little kid hearing my parents play the Rolling Stones or having my bass playing uncle bring his guitar over, I would gravitate towards that. The game changer was when I heard Blink 182 for the first time in fourth or fifth grade. I fell in love. My cousin got a guitar first so I got a bass and then his brother got a drum kit and we started playing covers in early middle school.  It was what I wanted to do every second. It was really special because we would play all the time. After Thanksgiving dinner, we would go in his basement and jam. I was so lucky to have that. Blink got me into other punk music which is my first love, but I love all types of music. Nothing like when a song comes on and gives you chills or makes you want to move.  Playing in a band is that plus more. Always was an outlet for me. Free therapy. There’s nothing I love to do more than play music.

Chris Lauletti (vocals): For me, the feeling of listening to a song that ends up redefining your perspective on something for the first time is magic in it’s realest form. I wanted to be able to take what was going on inside my own head, the demons I was facing by myself, and bring them to life so I can show people they’re not alone. Also, so I wouldn’t feel so alone either. I wouldn’t be alive if it wasn’t for music. In every situation, I could possibly think of it has helped me to keep striving through the darkness and continues to show me that humanity is ever evolving alongside myself.

Their new album, Hypervigilant, is out now and you can pick up a copy here.
Stay connected with From States Away: Facebook // Twitter
Interview by Rachael Dowd