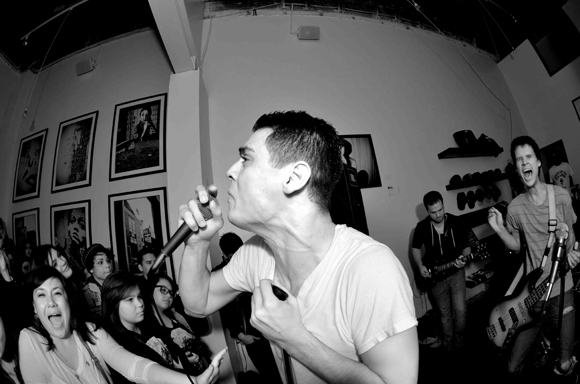 Los Angeles’ What Hands Are For are filled with a powerful sound that is fuel for amazing live shows. Check out the most memorable show that vocalist Daniel Baeza played below!

My most memorable show with What Hands Are For was at our old house in San Bernardino. We used to open up the house every weekend to touring bands from all over and of course to questionable cholos and party seekers. We transformed half of the house into a venue and tons of people would show up. One show that stands out was a night with Duck Duck Goose (Now Pollution People), Damage Done (Seattle) and Success!. We anticipated a lot of people to attend because of all the promotion we put into this night but no where near the amount that actually showed up. I would guess about 150-200 raging ass humans. During DDG’s performance, sweaty ass people were getting thrown into walls leaving several human sized holes. During our set Jon smashed my face with his bass and left me bleeding (still have scar). Crowd surfing was normal but people were being lifted and hitting/breaking the ceiling fan that was set to full blast. Much of the audience had no choice but to listen to the bands from outside the house and cramming into the kitchen due to the lack of space. This house was in a sketchy area so the neighbors didn’t complain, probably because they could do without the heat from the San Bernardino Police Dept. The cops showed up anyways but couldn’t do anything about the show because no one had called in the disturbance, so instead they parked outside our house handing out DUI’s and parking tickets and being…well…fucking terrorists. After the show ended, money was collected using a cooking pot to pay the touring bands and for some reason Jon and AJ threw two of our dinner table chairs into the fire pit, set aflame, while screaming that they discovered fire. We can’t account for the time between 3am-7am but we do know people made out with our toilet paper, some groceries, pedal boards (later returned by a guilty thief hahaha) , and some awesome DVDs. We were evicted days after this show and forced to move back with our parents.

-Daniel Baeza / What Hands are For

Be sure to keep updated with the band on Facebook!