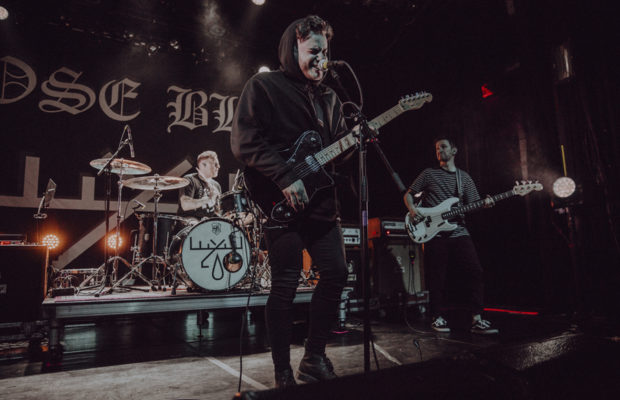 Moose Blood with Lydia and McCafferty

The first time that I had heard of Moose Blood was in 2015 when I was preparing for my very first Warped Tour at the age of 19… I was a late bloomer. I fell in love with their sound and the things that they wrote about in their songs, they’re extremely passionate lyricism that touched on extremely personal subjects. Three years later and I was preparing to see them bring their tour through New York City on Thursday night.

Moose Blood had spent the past couple of years establishing themselves as one of the most highly anticipated pop punk bands in the scene but with the release of their most recent album I Don’t Think I Can Do This Anymore, the band was breaking into the indie scene more and more. Bringing along two openers, the night was set to begin as McCafferty took the stage. I’m going to be honest, I’d never heard of this band before, but as soon as they began playing their first song I realized I was in the minority within Irving Plaza. Crowd members were shouting the lyrics back at the band members as big smiles erupted across their faces. It was a fun set and it really got the night started on the right foot.

Up next was a band that I had been a fan of since high school, but sadly had never gotten the chance to see them perform live. I always appreciate the little quirks that separate a band from the rest of the bands out there. For Lydia, it was their stage presence but also the fact that lead singer, Leighton Antelman performed on stage completely barefoot! The band kicked off their set with “When It Gets Dark Out”, before performing a vast array of songs both new and old including “Goodside”, the first single from their forthcoming album Liquor. The passion that the band members have for their craft and their art really shines through on stage be it from their uncontrollably contagious smiles or their joke cracking between sets. Watching Lydia perform live was a humbling experience because anymore, there are so few bands who view their fans as friends and those bands that do, we have to cherish.

After Lydia concluded their set, the venue fell quiet as the stage was prepped for Moose Blood’s arrival. It was the second night of their nationwide headlining tour so everyone was amped up and very few knew what to expect from the setlist. The lights went dark, the projection screen lifted and Moose Blood took the stage. They opened with “Talk In Your Sleep”, before delving into some older songs like “Bukowski”, “Knuckles” and “Pastel”. Though Moose Blood has had their fair share of ups and downs in the industry recently, going through some member switches after accusations came out late last year, the band proved that they had a reason to be here. Their lengthy 19 song setlist never dulled for one moment as the crowd pushed and shoved each other, all trying to get closer to the band to share that moment.

What I particularly enjoyed about Moose Blood was their choice of song to go out to. Many songs end their sets with their biggest and most energetic hit, but Moose Blood took the path less traveled and that is commendable. The band concluded their set with the overly emotional and heart wrenching song “It’s Too Much”. Everyone in the venue, exhausted from the great set that the band put on, fell to a silence and watched as Eddy belt the lyrics. For losing his voice on the second night of tour, it was very hard to tell! Moose Blood have just began their nationwide North American tour and have an extensive slew of dates coming up. I urge you to check out if they are coming to your town and get out there and see them and all the bands on the lineup!