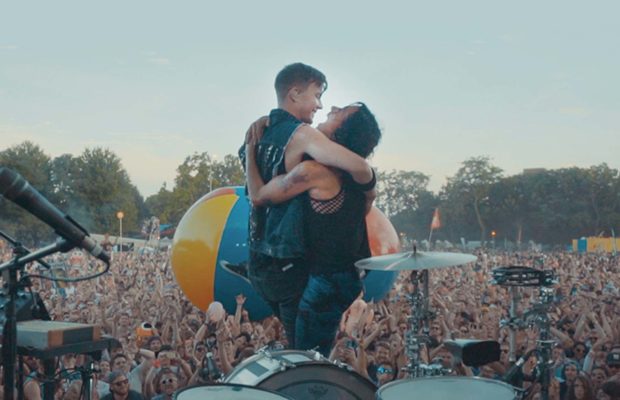 Brooklyn-based indie pop duo Matt and Kim are back with a fierce return! The band are embarking on their first North American headlining tour in over a year, after drummer Kim Schifino tore her ACL during a performance at a festival in Mexico nearly one year ago to date!

The nine-month recovery period that the duo faced might have seemed like a death sentence for any other band, but the closeness of the duo and their determination to come back better than ever took hold. On Friday night, Matt and Kim will return and make their North American — post injury — debut at the Starland Ballroom in Sayreville, New Jersey. The band will be performing old favorites (of course!), but fans should also expected to hear their fair share of some of the new tunes that Matt and Kim have been cooking up in their off time.

As spring approaches, we will be gifted with a brand new Matt and Kim album just in time for the warmer weather. You can definitely expect to be hearing all the songs off Almost Everyday being blasted around town. The album comes out this coming May and features guest vocals from some pretty big name individuals including Blink-182’s Mark Hoppus, Flosstradamus, Santigold and many more.

The duo have released their first single from the record “Like I Used To Be”, which features stand-out vocals from Kim in the chorus, as well as and additional background vocals from Flosstradamus and Travis Hawley of Night Riots. The song, which Matt and Kim explained, about being young and carefree, mirroring the personal sentiment that runs throughout the album about darker times and the need for change and perseverance. The duo stated that the nearly year long touring hiatus — the longest break the band has ever taken — was a catalyst for inspiration in creating this album, which is arguably one of their most intimate to date. You can check out the lyric video for the single below.

We will be at Matt and Kim’s first night of tour in New Jersey and are stoked for the energetic and fun night of partying and dancing that will ensue. The extensive tour hits every nook and cranny of the States over the course of a month and a half, concluding in Atlanta, GA at the Shaky Knees Music Festival. You can see the full album track listing and the variety of tour dates listed below as well. We highly encourage you to check out Matt and Kim on their upcoming tour, their live performance is something that you definitely don’t want to miss!

8. Youngest I Will Be