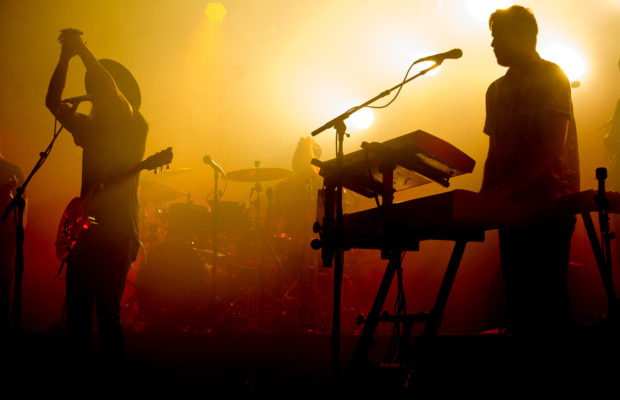 Moon Taxi with The Weeks and Los Colognes

Nashville-based indie rock band Moon Taxi performed recently in Louisville, Ky to a nearly sold-out crowd.  Iroquois Amphitheater is a beautiful venue, with a mostly covered seating area and plenty of open space as well.  It is surrounded by a wooded park, which, combined with the nice weather, made for a wonderful evening of music.  Starting their set off with “Mercury”, the guys in Moon Taxi were in good spirits, feeding off of the electric energy of the crowd, who were out of their seats and on their feet dancing from the moment the band took the stage.  Frontman Trevor Terndrup is an incredibly fun and charismatic performer.  He was very interactive with the crowd thoughout the evening, walking along the entire length of the stage on several occasions to play directly to the fans.  The band performed a nice variety of songs during their set, including several covers, such as Imagine by John Lennon and Hotel California by The Eagles.  They had a guest saxaphone player on stage with them for a couple of songs, as well!  For their encore, they performed “For No One”, a Houndmouth cover, and ended the night with their song “All Day All Night”.  Moon Taxi is an incredible live band and gave their fans a really fun evening.  Mississippi rock band The Weeks and Nashville rock band Los Colognes opened the show.

Photo and words by Emily May