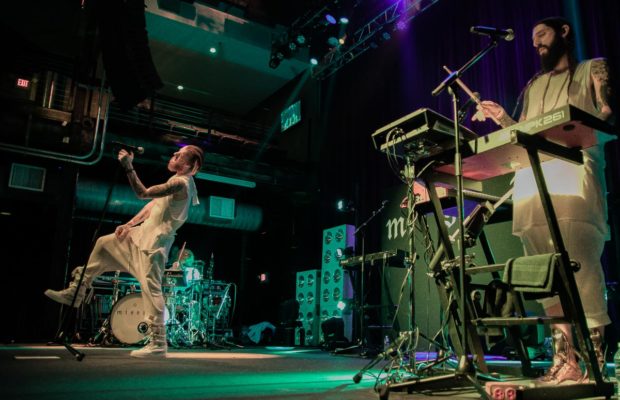 Louisville, KY plays host every year to Forecastle Festival, with several late night shows scheduled across several venues in town.  One of these late night shows saw Austin alternative electronic band Missio perform.  With a mix of electro-trap music, clever lyrics and catchy alternative hooks, Missio is an incredibly dynamic live band.  As the lights dimmed and the house music was silenced, the band launched into their first song, “Temple”, which saw singer Matthew Brue, clad in a hooded and flowing white robe, dancing his way across the stage while keyboardist David Butler danced behind the keyboard, often coming out from behind it to interact with the crowd.  The band performed several songs from their debut album Loner, including the tracks “Animal”, “Bottom Of The Deep Blue Sea” and “Everybody Gets High”, with the crowd singing and dancing along to every song.  Brue and Butler interacted with the crowd for the entire set, with Brue often kneeling down at the front of the stage to sing directly to them.  Brue chatted with the crowd between songs throughout the night, at one point telling them that this would be the final Missio show for a while as they work on new material and take a vacation after a year and a half of touring.  Towards the end of their set, the band performed their hit “Middle Fingers”, which saw the entire venue raise their middle fingers throughout the song.  Ending their set with “Kamikaze”, the band got the the entire venue moving with their infectious energy and music, ending their last show for a while on a high note.  It was a great night of music that left the crowd ready for their return!